It’s likely that you have come across Million Dollar Replicator through an email list, on social media or got it recommended by a friend or family member.

To be totally transparent with you I haven’t used Million Dollar Replicator so I can assure you that I will not attempt to sell you on it unless of course it’s worth investing in.

What I will aim to do is provide you with an unbiased 3rd party review of Million Dollar Replicator that will hopefully help you to make the correct decision in the end.

SUMMARY: I believe that MDR is definitely a scam and is something that you should absolutely skip out on. This is obviously reinforced by the plethora of red flags and problems that the product shows.

The overhyped claims, the flase scarcity, the lack of any knowledge of what the product does in the sales page, the fake testimonials and the fact that neither Michael nor his team are even real, are red flags that almost certainly, in my judgement, makes MDR to be nothing more than a scam.

So I’m sure you can figure out that I absolutely do not recommend that you buy MDR at all.

WHAT IS MILLION DOLLAR REPLICATOR?

The moment that I found the Million Dollar Replicator and then read the name, the fact it’s got the word million in it almost instantly made me think of how so many other products, that I’ve reviewed, which used million within their name turned out to be scams.

Of course that isn’t always the case but, it’s still a pretty interesting observation and correlation that I’ve seen amongst scam products.

Anyways, the next thing that stuck out to me was the massive bar at the top saying how the sales page will be removed by the end.of the night, yet again another thing that shady digital products seem to do.

This isn’t even the most outlandish claims that are made by MDR, it actually makes quite a few claims significantly more ludicrous than the ones I just mentioned.

In the video the spokesperson, Michael Sachs, talks about how you’re one of only a few people who’ve managed to get an invitation to his program before showing “testimonials” of other people who managed to make a few hundred thousand to over a million dollars using the system that MDR teaches.

Even part way through the pitch when he’s saying how his program is nothing like bitcoin, Ecommerce courses or an MLM, Michael goes so far as to claim that MDR isn’t a get rich scheme…

All he’s been doing uptill this point is try to hype the course as being an easy alternative to make lots of money, even in the sign up form below he says that you can make a million in a month.

If this doesn’t point out that MDR has very similar characteristics to a get rich schemes, hen I don’t know what does.

What I can tell you is that Micheal just tells you what you want to hear and not anything that’s realistic or even remotely true, the other issue is that you’re not even told what the product actually aims to teach you, all you’re told is that it’s essentially a done for you replicator system that’ll able to generate money for you on autopilot.

Which is why I believe my knowledge in what makes a product good or bad does have a bit of weight.

HOW DOES MILLION DOLLAR REPLICATOR WORK?

I honestly believe that MDR is not a system designed to help you actually make good money but instead a way through which Micheal can make as much money from you by feeding you lies that you want to believe.

As I said, the only thing that you’re kind of made of aware of, in terms of how the systems works, is that it’s like a duplication system that uses some done for you stuff to help you make upto $100k a month.

Besides that, you’re not really told anything or shown anything that gives you an outline of what method MDR is using, is it affiliate marketing, is it using paid for ads, video marketing…

The fact that the sales pitch is so bare bones yet the product is claiming itself to be awesome and the answer to all your problems definitely isn’t a very good look for Michael and MDR whatsoever. 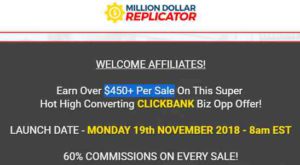 Unsurprisingly, like most courses or systems that promise the sky to you, MDR also has a lot of other upsells present along with the $37 front end package.

Although I couldn’t find out what exactly all of the upsells within the members area were, what I did learn is the commission  that affiliates can make. The maximum commission potential is $450 at a 60% commission rate meaning all of the products combined equal to $750!

Upsells aren’t inherently bad (although a little annoying) but, when a product doesn’t even try to show you how it works in the sales pitch yet still ultimately costs $750 in total, it definitely isn’t a very good look on the vendor and product itself, in my opinion at least.

WHO IS MILLION DOLLAR REPLICATOR FOR?

My stance on the product is that MDR is something that no one should ever consider investing in. The sales page overhypes the system in question yet doesn’t even show you what it’s actually offering, it’s got a bunch of other red flags such as fake testimonials, false scarcity issues and much much more which I’ll mention in a second.

The bottom line is that MDR has a bunch of clear red flags that make it a pretty shady thing to buy. Even in the off chance that it some how is a legitimate product, the fact all these red flags are present suggest that the vendors themselves are probably very incompetent and not worth learning from anyways.

So, in my perspective, MDR isn’t something that anyone should get involved with.

There are a bunch of overhyped claims regarding MDR scattered throughout the sales pitch and the landing page. The video pretty much starts off by showing testimonials of people who manged to make $80k a month or a million in a year and then goes on to claim how you can make upto $100k/month.

Just underneath the video, there’s actually a sign up form that claims that you can even make “7 figures in under 30 days”.

These claims are all ludicrous and unrealistic!

Even though Michael claims that MDR isn’t a get rich scheme, the fact he uses earning statements and advocates very unrealistic monetary potential for a newbie in the Internet marketing sector, is a very big red flag that so many other scams I’ve reviewed tend to do too.

At the top of the page there’s this false scarcity thing regarding how long the website will stay online, saying how it’ll be shut down by midnight.

Of course within the video you’re also told that there are a limited numbers of copies available, trying to get you to ignorantly think with your emotions so that you don’t feel as if you’ve missed out on a golden opportunity.

Obviously all of these scarcity claims aren’t real, in the end of the day Michael’s only goal is to get as many people into the system as he can so that he be able to make as much money from you as possible and I guess from what he’s learnt, using marketing tactics such as these seem to bring in results.

This is another common thing amongst scams and definitely a red flag that you should be wary of.

This pretty much puts the nail on the coffin, in terms of the legitimacy of MDR. The fact that fake testimonials are used to try and make MDR seem as if it actually works is a major red flag for any company or product to use, MDR being no exception.

The turth is that the testimonials within the sales page are actually actors from Fiverr and are people who are just told to read a script for the sake of making MDR seem like a product that really works. 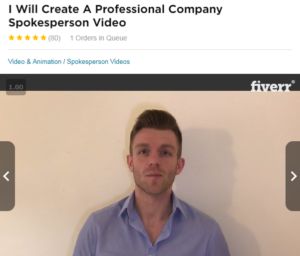 The truth is that it likely doesn’t work and this red flag probably cements the reasons as to why.

You Literally Get No Information About What The Product Does

This is actually something quite annoying that MDR does or should I say doesn’t do. I mena come on, the whole video tries to pitch you on why you should by this replicator system yet you’re not sure, at all, how it works throughout the video.

You’re not even told how you’ll be able to make money online, will you be using dropshipping, affiliate marketing, selling services?

It’s very unclear as to what you’re being sold on which of course is another red flag in my opinion.

Michael Is Fake And So Is His Team

Last but not at all the least, the whole MDR team is actually just a bunch of fake names and stock images put together to make it seem as if MDR actually has a legitimate team when they clearly don’t. 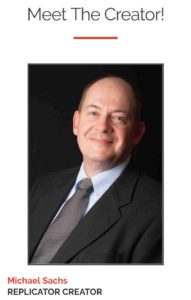 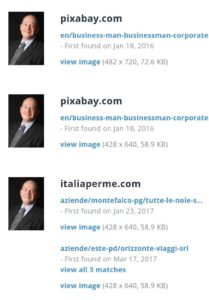 So what this means is that Michael is probably a pen name and the actual vendor is using being this fake alias and picture to save himself from being recognised and penalised for his, quite frankly, scam of a product.

I’m sure you can see why this is actually a problem and 100% another red flag and a reason to skip out on this product.

As MDR is a clickbank product, at the very least you should be able to get your money back so, this is, I guess, a nice touch and probably the only good thing about MDR.

IS MILLION DOLLAR REPLICATOR A SCAM?

I believe that MDR is definitely a scam and is something that you should absolutely skip out on. This is obviously reinforced by the plethora of red flags and problems that the product shows.

The overhyped claims, the flase scarcity, the lack of any knowledge of what the product does in the sales page, the fake testimonials and the fact that neither Michael nor his team are even real, are red flags that almost certainly, in my judgement, make MDR nothing more than a scam.

So I’m sure you can figure out that I absolutely do not recommend that you buy MDR.