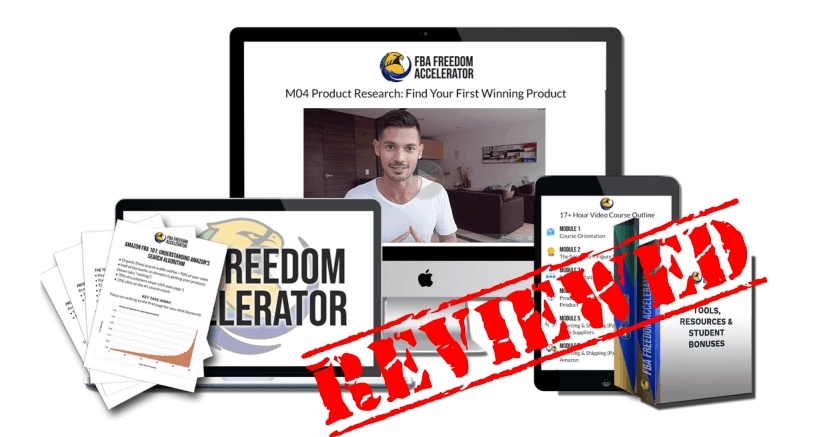 It’s likely that you have come across FBA Freedom Accelerator through an email list, on social media or got it recommended by a friend or family member.

First and foremost I must commend you for actually doing a bit of extra research before committing to purchasing or joining FBA Freedom Accelerator. For all you could have known, FBA Freedom Accelerator may very well be a scam and rob you of your money so this review could help you find anything peculiar about it.

To be totally transparent with you I haven’t used FBA Freedom Accelerator so I can assure you that I will not attempt to sell you on it unless of course it’s worth investing in.

What I will aim to do is provide you with an unbiased 3rd party review of FBA Freedom Accelerator that will hopefully help you to make the correct decision in the end.

SUMMARY: As far as I can tell and from the information I’ve gathered from other individuals learning from FBA Freedom Accelerator, the course is not a scam despite its frankly ridiculous asking price.

The information within the course is legit and can potentially help you run a profitable FBA business although as is the case with any kind of training, success isn’t guaranteed at the same rate for everyone.

I also do like Myles and find his transparency online to be quite refreshing which is why even with the ridiculous asking price for his course I can’t say it’s the worst decision you could make if you wanted to purchase it. Of course I also wouldn’t suggest you buy it either due to how expensive it but, in the end of the day the final call is yours to make.

RECOMMENDED: Not really (too expensive!)

WHAT IS FBA FREEDOM ACCELERATOR? 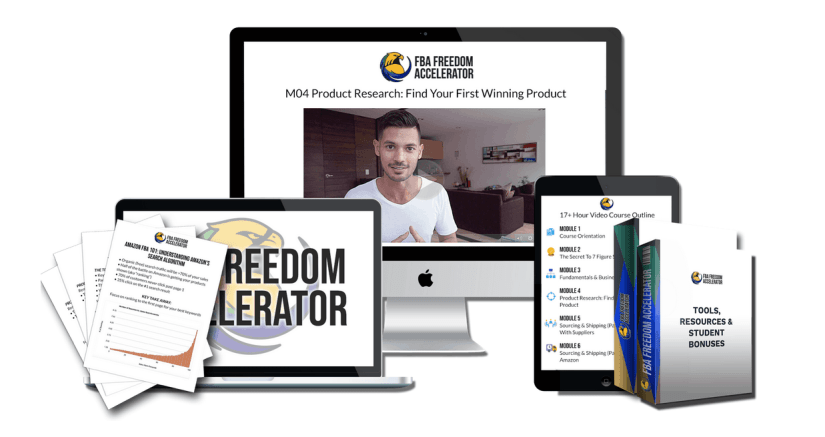 FBA Freedom Accelerator is an amazon FBA course created by Myles Dunphy who also goes by the name Nomad Millionaire based of his YouTube.

Myles Dunphy currently has 39k subscribers and appears to have been on the scene for around 2 and half years so, he ain’t no scrub when it comes to amazon.

Before getting involved with the YouTube FBA scene in 2017, Myles used to be an engineer however, after finding some success on his amazon side hustle, he decided it was the right time to quit and about time start  living his nomad lifestyle so to speak.

His claim to being an expert in amazon FBA is as a result of him generating over $1.3 million in sales within 12 months of starting up a store and over his entrepreneurship, within Amazon specifically, he has also supposedly generated over $6 million in revenue.

Of course real world profits will be far less, maybe in the 10 – 20% range but even then, that’s still a very solid profit margin (not to mention the other profits he’s made from other ventures including YouTube).

In short, although the numbers Myles mentions do appear be somewhat inflated, he is still among the more transparent individuals in this circle, occasionally letting us in on his income reports within a given month.

Regarding his 7 figure journey, Myles has put together a video going over this subject which you can check out below if you’re interested.

A simple breakdown of FBA Freedom Accelerator includes the following : 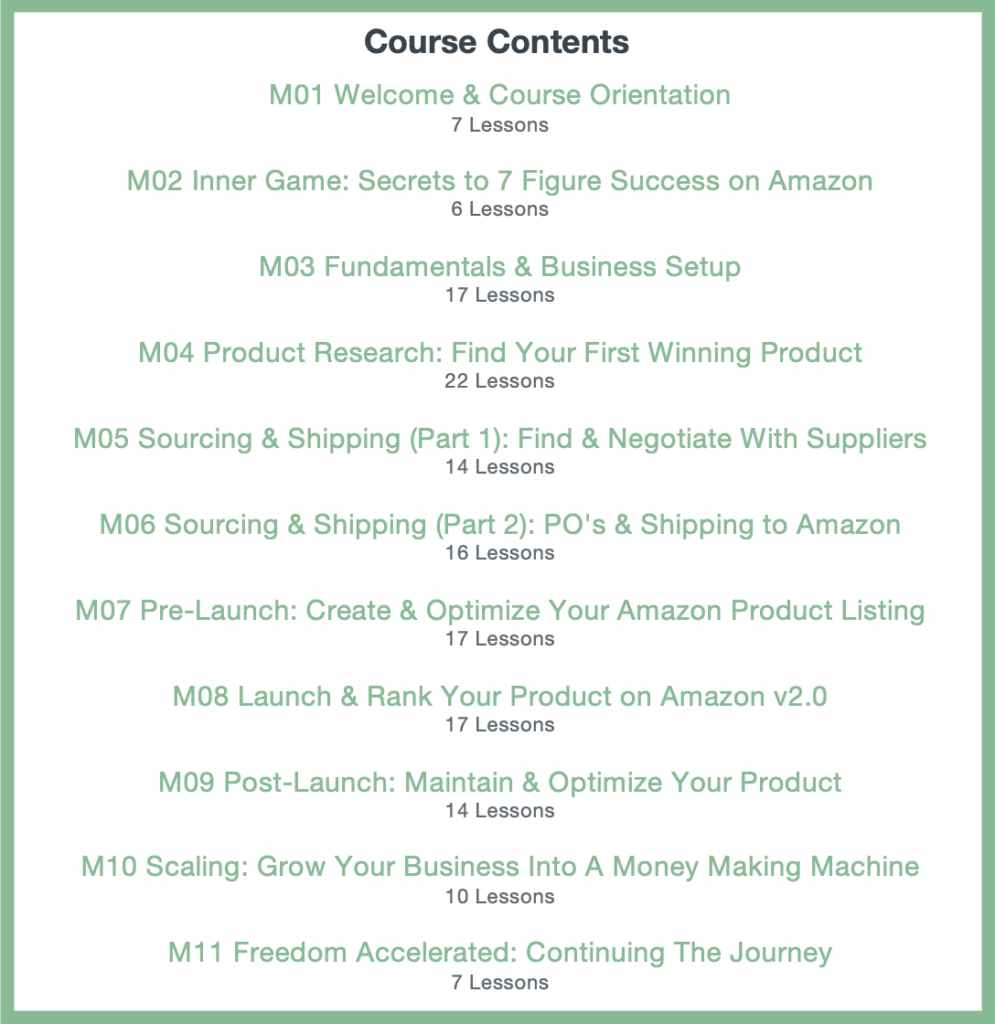 As for how these 11 modules are broken down modules 1 – 3 cover the fundamentals and the set up process of how to get the basics of an FBA business down.

This includes teaching you about the typical mindset stuff you’ve gotta get to grips with, how to set up your amazon account for this biz, the amount of money you’ll need in order to follow through with process and so on.

To me these 3 modules are important as it’s always a good idea to essentially remove the limited and false beliefs that most people will have with online business by telling them right off that it will take time and it won’t be easy.

Modules 4 – 7 go over the research phase of the products along with how to get ready for launch. In my research of the course I’ve found that members particularly liked the in-depth teachings on product research which the large majority of expensive courses tend to mostly skim over.

The rest of the modules are essentially your run of the mill negotiation and shipping elements of getting these products and sending off to amazon. All of this info is chronologically laid out and follows what Myles personally did to grow his amazon store to 7 figures in revenue.

Modules 8 – 11 cover how to achieve a successful launch, how to efficiently get reviews for your products, maintain and increase the rank of your products on amazon along with everything Myles did to scale hie business to where it is now.

What’s cool about this course is that after you’ve paid for the course once you’ll also get access to all future or updated content, which is awesome considering “gurus” on YouTube like Myles tend to relaunch their courses separately multiple times over.

The community also isn’t massive but, it appears to be active and Myles does appear to do an occasional Q&A session on Facebook if that’s something you’d gain value from.

HOW MUCH DOES FBA FREEDOM ACCELERATOR COST?

FBA Freedom Accelerator is not a cheap course, in fact I’d have to say that honestly it is way too expensive considering there are a fair few FBA courses out there that cost a fraction of the price.

From what I could find FBA Freedom Accelerator goes for $2000, which yes is very expensive but, considering Myles does provide a lot of value within the course that if you’re willing to make a $2k investment (along with $5k+ on testing products) I can’t say this a terrible course even if I personally cannot justify such a high cost.

If the course was $500 I could possibly justify the investment but for $2k, that’s honestly too heavy an investment in my opinion at least.

WHO IS FBA FREEDOM ACCELERATOR FOR?

FBA Freedom Accelerator is an FBA course designed for anyone who’s got a decent chunk of change to both spend and invest time into experimenting and ultimately getting to level where they will be able to generate a positive revenue aka profit as result of the training.

I will also say it is meant for beginners too as more advanced individuals will know the process behind finding a good product and most definitely will be able to gather whatever info they want on specific matters of amazon selling through the free content scattered online.

Discover How I Made $173 Through A Single Sale Using This Online Business Model, Click Here To Read How I Did It!

The Business Model, With Courses Price Is Quite Expensive

The FBA Amazon business is among the most expensive online businesses you can start with, that’s why if you don’t have a good amount of money to invest in this, ads to promote your products after purchasing them and of course the investment in a course if that’s the route you want to take, I can’t recommend opening up a store.

I’d say on average you will need around about $5k to start an amazon FBA store mainly because you probably won’t hit a home run with your first item. On top of that you’ll also need to have a decent amount of patience too, then again this is the case with most online endeavours nowadays.

As a whole this isn’t really a major problem as I’m sure you’d know the costs of starting this biz if you were interested but, it is still something to think over.

Myles’ course seems to be very detailed and he does come across as quite genuine on his free YouTube material. He even goes so far as to say that you don’t need to purchase his course if you don’t want because all the content he explains within the course can be found online for free.

Of course it won’t be anywhere near as structured but at least he isn’t being uber salesy here.

Nevertheless, from my research on FBA Freedom Accelerator, the contents are very detailed and should provide a solid structure to follow if you’re a beginner getting involved in the amazon FBA biz

Another positive is that the content provided is regularly updated to coincide with the ever changing circumstances of online business.

IS FBA FREEDOM ACCELERATOR A SCAM?

As far as I can tell and from the information I’ve gathered from other individuals learning from FBA Freedom Accelerator, the course is not a scam despite its frankly ridiculous asking price.

The information within the course is legit and can potentially help you run a profitable FBA business although as is the case with any kind of training, success isn’t guaranteed at the same rate for everyone.

I also do like Myles and find his transparency online to be quite refreshing which is why even with the ridiculous asking price for his course I can’t say it’s the worst decision you could make if you wanted to purchase it. Of course I also wouldn’t suggest you buy it either due to how expensive it but, in the end of the day the final call is yours to make.