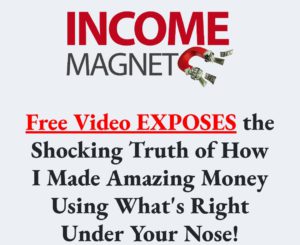 Welcome to my Income Magnet review!

It’s likely that you have come across Income Magnet through an email list, on social media or got it recommended by a friend or family member.

First and foremost I must commend you for actually doing a bit of extra research before committing to purchasing or joining Income Magnet. For all you could have known, Income Magnet may very well be a scam and rob you of your money so this review could help you find anything peculiar about it.

To be totally transparent with you I haven’t used Income Magnet so I can assure you that I will not attempt to sell you on it unless of course it’s worth investing in.

What I will aim to do is provide you with an unbiased 3rd party review of Income Magnet that will hopefully help you to make the correct decision in the end.

The Overhyped claims, the fake tetsominals, the lack of a face or a real identity to back Income Magnet and the fact that the real costs of the whole system account to around $400 – $500 do make me consider that Income Magnet is in with a chance to be considered a scam.

WHAT IS INCOME MAGNET?

The second that I landed on Income Magnet’s sales page, it instantly struck me as something that resembled the many other scams that I’ve reviewed in the past.

Of course I’m not one to just judge a product immediately by the way it looks so I checked out the sales pitch and to be honest with you, the whole pitch and the tone of the video didn’t really make the prospect of what’s being taught as being realistic.

Firstly, the person behind the product and the voice over dude within the pitch is an individual called Dan Redding and the method that he claims can make you $1k a day is voice acting.

Right in the beginning of the video, Dan claims that a few names, with no images or even full names, show how they’ve made hundreds of dollars daily before he goes on to explain his “life on how escaped the rat race” and became rich.

This anecdote is something that a lot of “get rich schemes” tend to do to in order to be more relatable to you just so you can resonate with the vendor. He explains how he spent thousands and had been scammed many time before he came across this voice acting thing his friend showed him.

So basically, Income Magnet is a blueprint teaching you how to do voice acting to generate really good money, even upto a $1000 a day.

I’ve reviewed quite a  lot of products on this website such as :

That’s why I believe I have a solid grasp on what makes a good or bad product.

HOW DOES INCOME MAGNET WORK?

Just to be clear, voice acting is definitely a legitimate way to make money online but, the manner in which Dan describes this opportunity, it seems like you could just start today and be making hundreds daily however, that’s obviously not true.

I’m sure you all know how voice acting works right? If not, basically what you need to do is read scripts and after you’ve read and recorded it, send the recording to the person who hired you and then you’ll get be paid whatever the client agreed upon however, making $1000/ day if you’re someone who’s just started in the field is going to be highly unlikely.

The truth is that getting freelance work that pays you well, especially in the beginning is going to be very difficult. This is because in websites like Fiverr or Upwork, where you’ll be able to advertise this kind of work, you won’t get many opportunities if you’re charging a lot and don’t have many positive reviews.

Therefore, in order to build up you’re portfolio and increase you’re trust within the platform, you’ll likely be charging very little, I doubt you’d be making anything if you were charging the hundreds that Income Magnet suggests.

No business starts off at the top, the fact of the matter is that you will need to do a lot of work to grow and mantain your voice acting business and I doubt that Dan’s $37 course will fast track this for you.

It was hard to find exactly how many upsells Income Magnet will bombard you with once you make it into the members areas but, after doing a little digging it appears that as an affiliate you’ll be able to make $235 so, at the very least, if you consider that Income Magnet offers a 50% commission per sale, you’ll probably need to spend around $470 for whatever else Dan sells.

This isn’t very surprising because pretty much all clickbank products have significantly more expensive upsells in the members area and in general, most of the more “valuable content” is hidden within them and not the front end package.

WHO IS INCOME MAGNET FOR?

I don’t think that anyone should invest Income Magnet because the method of making money that teaches, which is making money through freelance voice acting, is something you could easily learn on the Internet for free without the need to invest in an overhyped product like this one.

There are also a few other red flags that add to why I personally don’t think anyone should spend $37 on Dan’s program, all of which I’m going to mention down below. 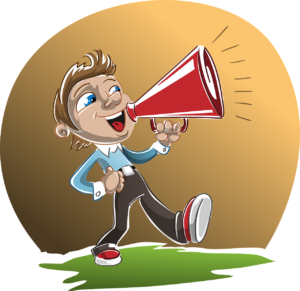 The claims that Dan makes in the sales page as well as his rag to riches story just don’t seem very plausible, especially for newbies.

Him stating how it’s possible to make up to $2k a day through voice acting gigs doesn’t really seem vert realistic and of course is very misleading to consumers who jump into this program thinking it can save their financial situation.

Although I do think it may be possible to make good money through voice acting, first you would need to work hard in building your brand and the truth is that doing so will mean you’ll be working for little to no money in the beginning and not immediately find this loophole of making hundreds or thousands of dollars a day.

This is a very common feature within scams out their and a red flag that you should probably take into account.

The Testimonials Are Obviously Fake

The tetsominals that are thrown in the beginning of the video are both lazy and unlikely to be true. First off you’re not even given the full names of these people who have supposedly made $300,$500 or $1000 a day, you’re only shown their first names and a random figure showing how much they make.

Secondly there’s no images to go with the testimonials making it seem that these people are less real than Dan wants you to believe.

This is another red flag in my opinion because the tetsominals are more than likely to be fake.

The Identity Of The Creator Is False

The identity of the vendor is not shown throughout the video, you’re not shown an image of who he is and the name Dan Redding is also a pen name as stated on the sales page.

If the vendor is too afraid to show his face on the product or even his real name, why then should you trust whatever he’s trying to sell you as being legitimate? The use of the pen name means that even if the product is to get a lot of backlash for being shady or a scam, they won’t suffer any damage because no one can make out who the vendor is.

This is generally another very common red flag that get rich schems or scams tend to do so to me, at this point Income Magnet definitely isn’t a very appealing prospect.

And finally the last red flag I want to point out is the fact that the real costs of Income magent is definitely going to be a lot more than the $37 asking price.

I couldn’t find the actual costs of the upsells but, when you take into account that as an affiliate you can make a max of $235, if you consider that the commissions are 50%, the real cost of Income Magnet will be around the $500 mark.

So, If for some reason you do buy into the front end package that Income Magnet offers, don’t be surprised if you’re bombarded with all the other upsells that the vendor has to suck you dry of your hard earned cash.

As Income Magnet is a clickbank product, it’s highly likely that you will be able to get your money back if you don’t like what’s on offer so, if you do decide to check out what’s in the members area yourself, the 60 day money back guarantee should have your back.

IS INCOME MAGENT A SCAM?

The Overhyped claims, the fake tetsominals, the lack of a face or a real identity to back Income Magnet and the fact that the real costs of the whole system account to around $400 – $500 do make me consider that Income Magnet is in with a chance to be considered a scam.

If you do want to earn money freelance voice acting, it definitely is possible but, it’s highly unlikely you’ll make big bucks right off the bat however, if you want to learn of another way to make money online, I’d suggest that you continue reading…