It’s likely that you have come across PlanNet Marketing through an email list, on social media or got it recommended by a friend or family member.

First and foremost I must commend you for actually doing a bit of extra research before committing to joining PlanNet Marketing. For all you could have known, the product could be a major scam so the fact you’re here right now, researching whether or not that’s the case is a pretty smart move on your part.

To be fully transparent with you, I am personally not a member of PlanNet Marketing so I can assure you that I will not attempt to sell you it unless of course it’s worth investing in.

What I will aim to do is provide you with an unbiased 3rd party look at PlanNet Marketing that will hopefully help you to make the best decision you can in the end.

TYPE OF PRODUCT: travel based MLM

WHAT IS PLANNET MARKETING?

PM is a travel based MLM company founded by two individuals, namely Don Bradley and Andy Cauthen. This actually isn’t the first travel based MLM I’ve reviewed, others include the likes of traverus, ibuumerang, Goodlife USA and inteletravel.

In fact it seems like PM are partnered up with InteleTravel where they pretty much act as a subsidiary to them as PM reps are asked to sell inteletravel’s travel based services and membership to others.

In regards to the owners of the company, it does seem like they have a good knowledge of the MLM scene. In the past Don was actually the VP of another travel based company called paycation.

And before becoming the VP of paycation he worked in another travel based company called Pro Travel Network so, it’s safe to say he knows how travel based MLM’s work.

Andy similarly has a lot of experience in the MLM scene where he became the CEO of this one company called YTB International. This company was notorious for being a shady company so it doesn’t add a whole lot of credibility for Andy but he did leave it in 2014 probably do to these problems.

PM is also a travel based MLM and both owners  seem to be quite knowledgeable in the niche is based on so, there is hope on it being a solid company however, if it’s a good business for normal folk to join us another matter entirely.

As I’ve mentioned above, PM are partnered up with inteletravel so the first way to make money with the company is to promote InteleTravel’s services and membership. The second method is to promote PM’s memberships.

On their website they state that there are 2 methods to earn, which include the following :

So in simple terms it seem like PM is simply an extra add on on top of InteleTravel meaning you’ll basically be promoting InteleTravel’s compensation plan.

What that means is every time you sell one of inteletravel’s packages you’ll make a commission whilst you can also choose to promote PM to others and make more money in that regard.

However, trying to sell individuals on the idea of joining inteletravel won’t be easy. For someone to join they’d need to spend $179.95 plus $30/month.

So in short, PM use inteletravel to sell travel deals and products to would be customers.

HOW DO YOU MAKE MONEY WITH PLANNET MARKETING?

As is the case with pretty much all MLM businesses there are 2 ways to make money with them, PM being no exception.

If you want to become a PM member, I believe it will cost you $19.95 per month to do making it quite affordable to join the company.

This is probably the most important document for any would be PM affiliates therefore, you should go over this multiple to understand how the company’s payment structure works. I’ll briefly be covering it here but, you should get your hands on the plan if you’re planning on joining PM.

Firstly, there are 7 ranks within PM, which include the following :

Considering there are this many ranks within PM, it’d make sense that the top ranks are where the money is at however,  achieving them will be a lot easier said than done.

I believe that as an ITA you’ll be eligible to make 70 – 80% in commissions from every package you sell whilst every time you recruit an ITA that purchases the starter kit for $179.95 + $30/Month, you’ll earn a further $50 commission.

This is a matched bonus you’ll receive whenever one of your personal recruits manages to sign someone else up for an ITA package. If this is accomplished, PM will match 50% of the recruitment package that the new recruit would make for the sale. This means you’ll receive a $25 commission.

Once you’ve become a Gold builder member, you’ll become eligible for this bonus. By achieving the rank you’ll be able to receive a $10 bonus for every ITA sale that is made in your downline, provided there aren’t any other Gold builder members below you

This is because the bonus is paid out to the first person ranked as a Gold Builder in the up line for every ITA sale made in the downline. The bonus also follows a unilevel structure so there could theoretically be an infinite number of members within your downline, with multiple different levels.

PM uses a 3×9 matrix through which it pays members residually. This simply means that each member in your team will be able to recruit 3 people and the vertical depth till when you can earn from the matrix stops at level 9. Once you reach the minimal requirement of 9 people in your team (which obviously will not be easy to do) you’ll be able to earn via this method.

After you’ve met this criteria you’ll be able to earn $4 a month in residual commissions.

There are various other bonuses such as their director bonus and the rank achievement bonus, but I won’t be covering it here because it’s not something that’ll be useful for you when you start out anyways.

But, If you want a more in depth look at the plan, click here or watch the video below.

You’ll Need To Be Good AT Recruiting To Succeed

Recruiting is likely where you’ll make the majority of your Income and this is purely due to the fact travelling is generally a very seasonal thing.

Don’t get me wrong, it definitely is possible to make sales on certain travel deals in the winter periods but, for the most part it’ll be very tough to do therefore, I would think in such a case recruitment will play a huge role in how much an affiliate for PM will make with the company.

My position on this is further influenced by the fact a lot of the earring elements within the compensation plan are heavily reliant on either you or your downline team bringing in more recruits or remaining monthly paying members.

Which is why I’m pretty sure the only members who’ll succeed with PM are those that are already good at recruiting or are willing to put in the hours and other investments to get good at it.

The Services Are Really Expensive

Convincing someone to not only pay $180 but also a further $30/month won’t be easy to do, which is why I believe it’ll be really hard to recruit someone into the company.

Of course if you’re already good at recruitment There’s a good chance you’ll be asking a lot of people therefore, the numbers game will play in your favour however, the majority of affiliates will struggle to sell the membership which is why this might be a big enough reason to skip out on the company.

Most People Are Failing

According to PM’s income disclosure statement, the majority of individuals do appear to be failing and honestly, I’m really not all that surprised. 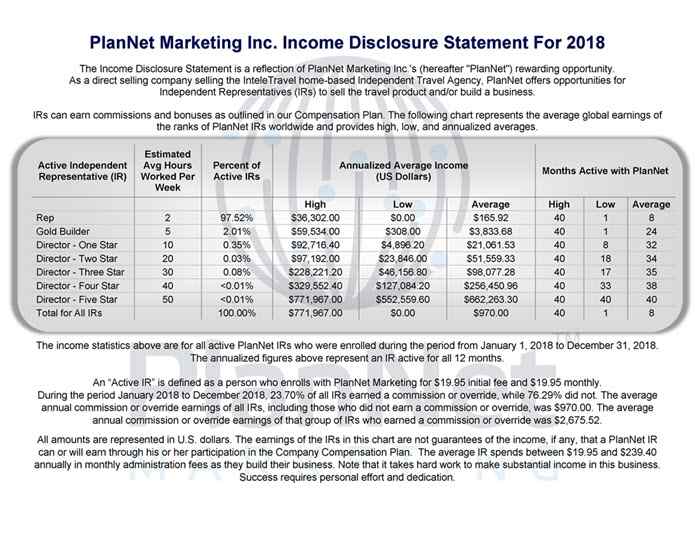 The majority of members within the company, which make up 97.2% of all members only average an income of $165.92 per year.

That’s low even among other MLM companies. Of course at the very top end, we’re talking the really high director ranked members, they probably are making a full time income but the percentage that are achieving around $2k+ month equate to less than 0.5% of all members.

So definitely take these numbers into consideration before joining PM

The joining fees for PM are pretty reasonable at $19.95/month whilst the company also has a pretty good reputation among reps. Moreover the owners are pretty well versed in the travel based MLM sector so, the company itself does have a fair few good things going for it.

IS PLANNET MARKETING A PYRAMID SCHEME/SCAM?

PM is neither a pyramid scheme or a scam, its a legitimate MLM company that works with another legit company to promote deals and of course, it not all that expensively to join and the owners are also very experienced in travel field (which is reassuring for sure) however, this does not mean I’d recommend anyone join it.

The heavy emphasis on recruitment to succeed and of course the abysmal success rate (we’re talking less than a 0.5% chance) are two big enough reasons to skip out on PM.