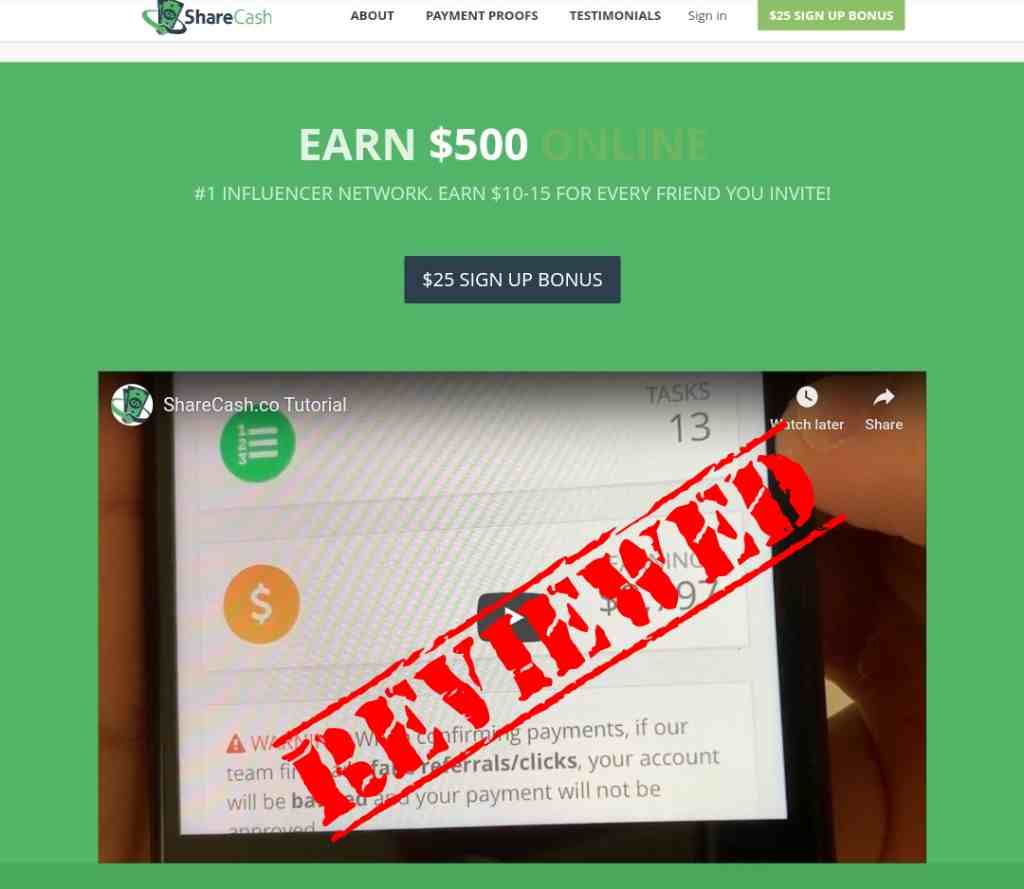 Welcome to my ShareCash.co review!

It’s likely that you have come across ShareCash.co through an email list, on social media or got it recommended by a friend or family member.

First and foremost I must commend you for actually doing a bit of extra research before committing to purchasing or joining ShareCash.co. For all you could have known, ShareCash.co may very well be a scam and rob you of your money so this review could help you find anything peculiar about it.

To be totally transparent with you I haven’t used ShareCash.co so I can assure you that I will not attempt to sell you on it unless of course it’s worth investing in.

What I will aim to do is provide you with an unbiased 3rd party review of ShareCash.co that will hopefully help you to make the correct decision in the end.

SUMMARY: Yes ShareCash.co is a scam and one that you should avoid and advise others to do the same.

The overhyped and unrealistic claims, the fake testimonials and earning statements, the owner being undisclosed, the fact it’s yet another rehashed variation of other similar systems and lastly ShareCash.co being a data harvesting scam are the main reasons why you should do your best to avoid this system as you definitely will not make legitimate money with ShareCash.co, I can assure you. 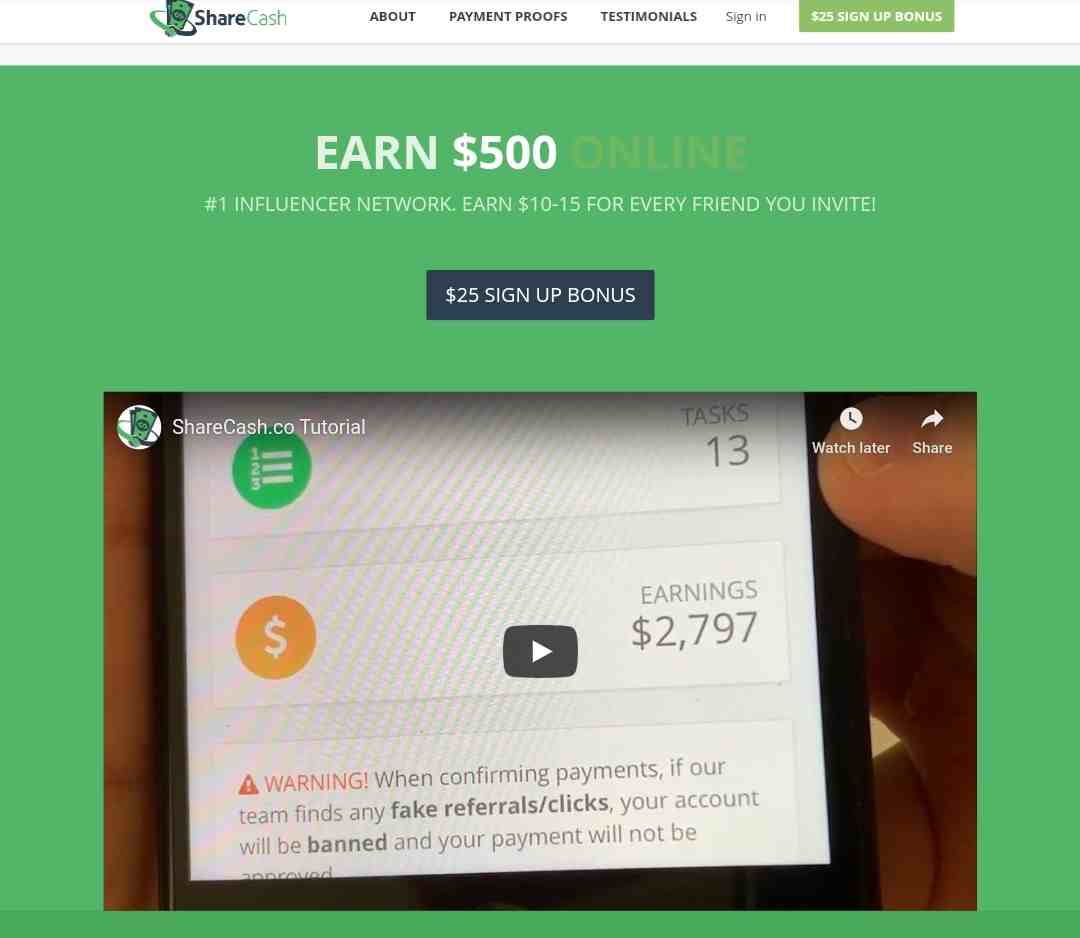 ShareCash is yet another one of these overhyped GPT systems that just won’t deliver. These systems always seem to claim you can make a $25 sign up bonus through them, $500 a day whilst also claiming to be the #1 Influencer network around.

If there’s one thing I can guarantee, it’s the fact that ShareCash will not deliver on any of these claims or even live up to its own hype.

The reason why is because this isn’t even the first GPT Site of its kind that I’ve reviewed on here. Some of the other variations include :

And the fact pretty much all of these variations claim the same things, some of which were even shut down not too long ago, makes it impossible for me to trust in the words of yet another GPT scam that follows the form of the many that I’ve already exposed.

To put it bluntly ShareCash is not designed to help you or anyone like you make money, it’s true purpose is to gather data in order to help the owners make some cash by selling your data to third parties. It’s not to help you make $25 from signing up, $10 from signing others up through your link or $1 – $5 for completing tasks in the members area.

I’ve seen my fair share of GPT systems and even used a few of them myself and what I’ve come to find is that it’s generally very hard to even make $50 a month using them, especially as a beginner, let alone $500 in a day.

Moreover, they tend to only payout around a couple bucks per referral too, which is much less than what’s offered by ShareCash. The testimonials and earning statements may come of as somewhat legitimate for others but I can also assure you’re they’re not (I’ll prove it a little later in the review).

In the end of the day, the reason why ShareCash.co entices you with these offers is, as I said, simply to gather data from you and sell it off to third parties.

The issue here is that if you’re an individual gullible enough to fall for these lies and provide them with an email address and password that you’ve used for some of your more confidential accounts like PayPal or amazon even, the undisclosed owners or third parties could hack into those accounts and possibly even compromise them.

They may even steal from you in the worst case scenario.

ShareCash.co is not a system that anyone serious about making money should join because it’s purely a system designed for the owner to make money selling your data to others over you making money by signing up or signing others up.

In fact I’m pretty sure that the payout threshold will be really high too, at $200ish, just to make individuals recruit as much as they can for ShareCash before finding out that they’ll never get paid out.

In the end of the day there are definitely ways to make money online and good money at that provided you sign up and follow a proven strategy but, the fact of the matter is that ShareCash simply isn’t one of these legitimate systems.

When a a free to join get paid to site claims you can make $500 through it toady, allows you to earn $25 by just signing up and even allows you to make $10 per referral, there’s reason to be suspicious of the company because these statements and figures are frankly way too unrealistic. 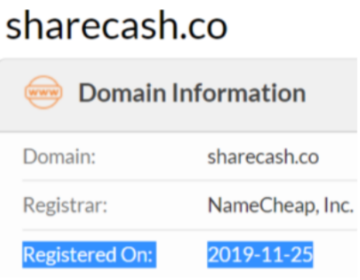 Moreover, the company claims to have started up in March 2015 yet the domain age is not even half a year old so that’s pretty telling about how trustworthy ShareCash (as in it’s not at all) is.

The fact the company seems to use of a ton of these overhyped and unrealistic claims to try and promote itself to others is a major red flag in my eyes and is one of the more common red flags scam systems tend to have.

The Testimonials And Earning Statements Are Fake

The testimonials are likely created from fiverr individuals and the earning statements are also fake because they don’t actually match the date on which the domain was registered. 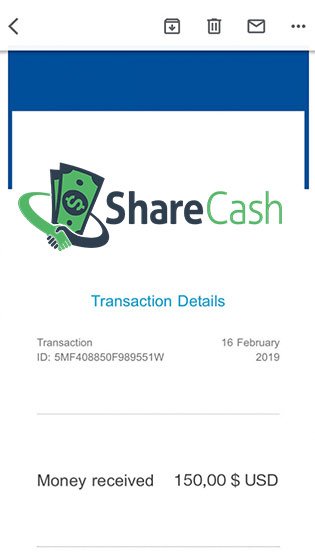 The image above shows a earning statement from February 2019 which doesn’t line up with when Sharecash’s domain was registered so, which is yet another red flag.

Of course I know the reason why this is the case, it’s because the owners created the testimonial for one of their older sites that got shut down but didn’t want to go through the effort of covering their tracks. So instead they decided to rehash this old earning statement onto a new site.

I also know that the average person wouldn’t go out of their way to check the registration date of a website but, this does go to show how sloppy this scam is.

The Owner Is Not Disclosed

The owner isn’t disclosed in their about page which goes to the show the owners behind the system probably know Sharecash isn’t a system worth promoting actively.

Normally when a product doesn’t show a legit owner behind the system, it more often than not leads to the system in question being untrustworthy and quite frankly labels them as a scam.

This is probably the biggest reason why you should avoid joining Sharecash and ask others to avoid it equally. The reason why as I explained earlier is because they may do whatever they want with the data you provide, whether it be to sell it to third parties or even to hack into your personal accounts.

It’s A Rehash Of Other Similar Scams

This isn’t the first GPT data harvesting scam of its kind that I’ve actually seen. In fact I’ve seen many tens of different ones with pretty much the same sales copy. The only major differences between each variation being the design and logo.

There is literally nothing good I can say about ShareCash. Even the fact it’s free is somewhat of an issue too as people who aren’t aware of the scheme could risk a lot by simply joining.

Maybe besides it’s easy to navigate website design, there isn’t anything that’s concretely positive about this GPT system.

Yes ShareCash.co is a scam and one that you should avoid and advise others to do the same.

The overhyped and unrealistic claims, the fake testimonials and earning statements, the owner being undisclosed, the fact it’s yet another rehashed variation of other similar systems and lastly ShareCash.co being a data harvesting scam are the main reasons why you should do your best to avoid this system as you definitely will not make legitimate money with ShareCash.co, I can assure you.