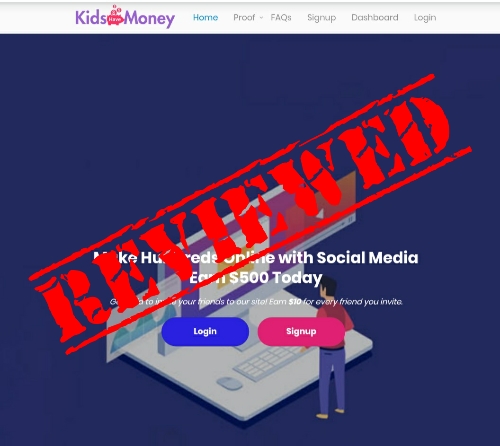 Welcome to my Kids Have Money review!

It’s likely that you have come across Kids Have Money through an email list, on social media or got it recommended by a friend or family member.

First and foremost I must commend you for actually doing a bit of extra research before committing to purchasing or joining Kids Have Money. For all you could have known, Kids Have Money may very well be a scam and rob you of your money so this review could help you find anything peculiar about it.

To be totally transparent with you I haven’t used Kids Have Money so I can assure you that I will not attempt to sell you on it unless of course it’s worth investing in.

What I will aim to do is provide you with an unbiased 3rd party review of Kids Have Money that will hopefully help you to make the correct decision in the end.

SUMMARY: KHM is 100% a scam and something that you should avoid at all costs if you’re serious about making money online.

The overhyped and unrealistic claims, the fake data used, it being a data harvesting scam and the fact that it’s essentially a rehash of other similar products I’ve reviewed really adds to the reason why I consider KHM nothing but a scam.

Hence I do not reccomend you join it.

WHAT IS KIDS HAVE MONEY? 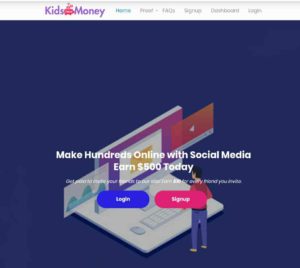 The moment that I landed on the KHM landing page it instantly reminded of a scan that I’ve seen multiple times and exposed but, just with a different paint job an logo.

The main headline saying how you can make $500 today with this Get Paid To system (GPT) is just a massive red flag about the product, it makes its come off as a get rich quick scheme and if you know anything about online business let online GPT sites like KHM, making $500 in a day just isn’t very realistic.

There are also a bunch of other fake parts to the websites such as the data and even the fact that people are getting paid $250 or something along those line as well as a huge problem with it l pretty much being a rehash of other scams.

And of course in this review I’ll get a little deeper into why it’s a horrible system and something you should definitely think about skipping.

Just so you know that I’m at least somewhat trustworthy, I’ve reviewed a lot of good and bad products on this website such as :

HOW DOES KIDS HAVE MONEY WORK?

The way that KHM works is not at all to make you money but for them to harvest your data and sell it off to a third party if not just salvage your data for themselves.

In the end of the day this scam is still, in my opinion, a dangerous data-harvesting scam and not a viable place to make lots of money by signing people up or signing up yourself.

If you’re not too sure why I consider a data harvesting scam very dangerous, it’s because if you did sign up to the website, you’d probably use some password that you use for everything else right (a lot of people actually do this if not you) so, if KHM decided to sell that data, the third party buyer could use your data to sign in to your personal accounts and cause a few problems

Moreover, the other thing is that you definitely will not get paid through KHM too because there’s no way a GPT Site would both offer a $10 price for every referal and pay out especially when you take into account that they’re not selling you really high ticket items.

You got to ask yourself do you realistically think KHM would make any money if they legitimately paid out that much for a referral and signing up?

So in short, it’s a data harvesting system that will not pay you out because it just doesn’t make sense how a company can pay you so much for not having you sell anything on their behalf.

WHO IS KIDS HAVE MONEY FOR?

Absolutley no one should even consider joining KHM because over the multiple red flags that it shows from the data it uses all the way to the unrealistic claims it makes about making money through it.

So of course, in my eyes KHM isn’t for anyone whatsoever.

The fact it makes that claims that you can make $500 today is very bold and essentially 100% of the time it also goes to show that the system being promoted is not something to trust at all.

Moreover, it also uses some clearly fake data too regarding how’s its paid out millions to its members and has hundreds of thousands of members…

When you take into account that KHM is only 2 months old, atleast when you look at its domain age, how likely do you think it is that KHM has genuinely got that many members or paid out millions? I’m not sure you’re thinking the same as I am as in it’s highly unlikely to be the case.

So, of course this overhyping of it being able to pay you $500 today or of it being the #1 social earning network just doesn’t have much weight to it when the website itself is only around 2 to 3 months old which is why all of the claims and overhype come of as pretty red flags in my eyes.

The data harvesting, as I’ve already mentioned can be very dangerous if for some reason you put your details into the sign up page and signed up so, if you have done so, change your password as soon as you can.

Data-harvesting models like the one KHM uses is done so that the owners can benefit from your naivety and potentially put your online persona and important details like your bank account details in some cases in trouble so, to me, there’s no question as to why this element shouldn’t be considered a red flag.

It’s Rehash Of Other Similar Pages

I’ve seen many other landing pages and products that have used more or less the same page structure and payments plans as KHM has. This includes the like of kids earn cash, notion cash, viral pay, viral bucks and I know that there are a ton more with essentially the same premise.

Clearly none of these have been positively reviewed by myself or anyone else for that matter because they come off as very low quality products, that’s why the fact KHM is essentially the same product, makes it come off as a very big red flag in my eyes and a massive reason to avoid it.

There’s literally nothing good that I can say aboy KHM, it’s just a very shady product and that’s about it. I guess it does look somewhat presentable, which is why some people would fall for it but, besides that it’s as close to a scam as bitconnect was.

IS KIDS HAVE MONEY A SCAM?

KHM is 100% a scam and something that you should avoid at all costs if you’re serious about making money online.

The overhyped and unrealistic claims, the fake data used, it being a data harvesting scam and the fact that it’s essentially a rehash of other similar products I’ve reviewed really adds to the reason why I consider KHM nothing but a scam.

Hence I do not reccomend you join it.