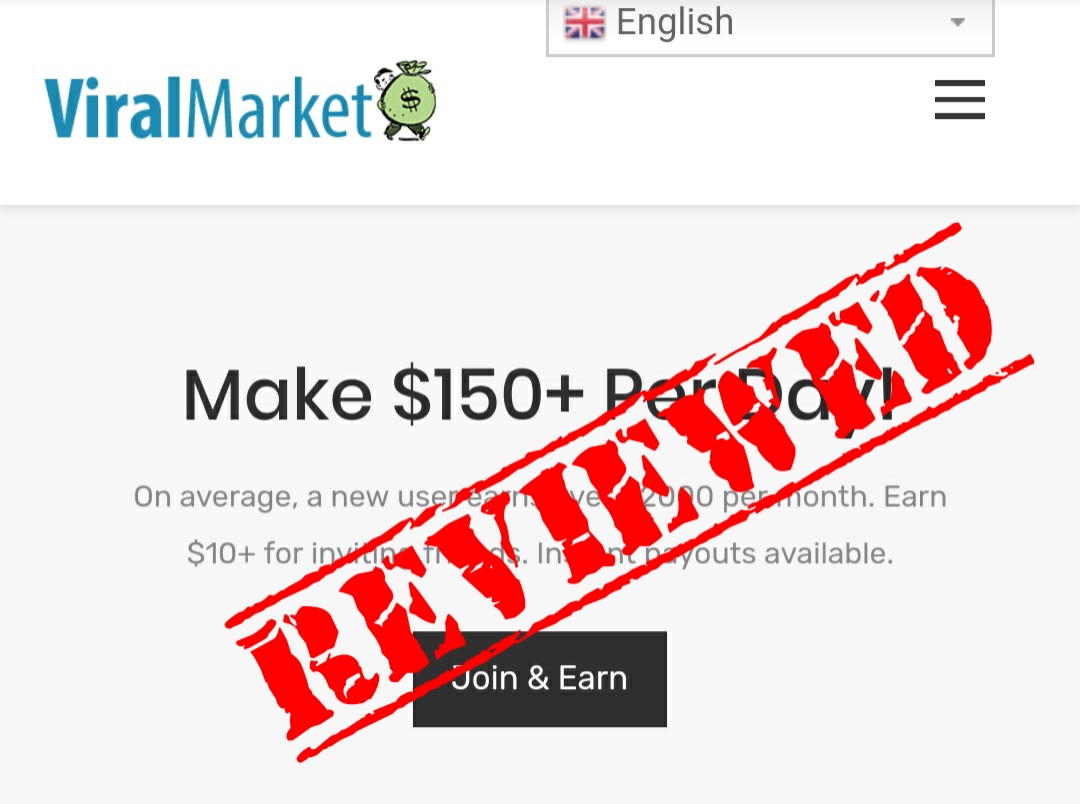 Welcome to my ViralMarkets.co review!

It’s likely that you have come across ViralMarkets.co through an email list, on social media or got it recommended by a friend or family member.

First and foremost I must commend you for actually doing a bit of extra research before committing to purchasing or joining ViralMarkets.co. For all you could have known, ViralMarkets.co may very well be a scam and rob you of your money so this review could help you find anything peculiar about it.

To be totally transparent with you I haven’t used ViralMarkets.co so I can assure you that I will not attempt to sell you on it unless of course it’s worth investing in.

What I will aim to do is provide you with an unbiased 3rd party review of ViralMarkets.co that will hopefully help you to make the correct decision in the end.

SUMMARY: I can very confidently say that VM is a scam and there are a bunch of very concrete red flags that prove why I believe this to be the case.

The red flags include the use of overhyped claims, fake data to try and entice you, the lack of the owner being disclosed, the clear signs of it being a data harvesting scheme and the fact I’ve seen a bunch of other GPT systems with pretty much the same overhyped BS just make it so that I honestly can’t consider VM anything but a scam.

So definitely do skip out on it and look into something else if you’re serious about making money online. 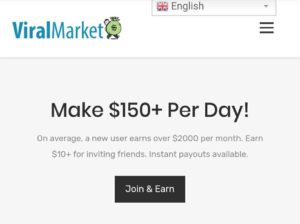 The instant I jumped on the front page for VM I knew that this was a very popular scam website and GPT system I’ve checked out and exposed many times albeit with a different name and paint job.

Even if I didn’t know for a fact that VM was a scam, I’m sure you’ll agree with me in thinking that there are a bunch of aspects to it that are a bit too good to be true for GPT system.

Think about it, is it realistic to assume you can make around $150+ a day from just completing tasks or getting around $10 – $20 per referral from a system that’s free to join? Seriously, do you think it’s possible to have earned $172k from a system that not even that old (I’ll prove this a little later on)?

Well the short answer is absolutely not.

The truth is that VM claims to be able to be the #1 Influencer system yet hasn’t worked with any high end influencers. As for paying out $2k a month, we’ll that’s also a lie, in reality the main premise for this kind of system is to harvest your data and nothing more.

Just so you’re aware that I know what I’m talking about when it comes to a scam or legitimate product, I’ve reviewed many different products on this website such as :

VM claims that it pays out its members from money it receives from the ads and sponsorship however, this isn’t at all true, the truth is that VM doesn’t make money in this way, the reality is that they make money from actually selling your data and obviously from this money, they don’t pay you out but instead keep the money for themselves.

The thing is that data harvesting scams like VM can be quite dangerous because it’s very possible that if you sign up using an email and password that are actually the same as the ones for your personal and more confidential accounts, the people behind VM or the third parties they were sold could hack into your accounts and cause you some major problems.

Of course this isn’t always going to happen but, there is a possibility that it could so if your mind was set on joining VM because of high referral figures and the potential of making $2k a month, don’t be fooled by the overhype because I’m sure that you will not get paid in the end.

VM is something no one should get because it does not work and you may actually risk third parties or VM’s owners themselves exploiting your data.

There are also a bunch of other red flags that add to why VM is a scam (which I’ll explain in a bit) so don’t be fooled by all these testimonials and the potential because you definitely won’t make any money at all through VM.

Overhyped And Fake Data Being Used

The fact a get paid to site is this overhyped to the extent where you’re told you can make $150 a day, is pretty out there in terms of what other GPT’s tend to offer.

All the claims of it being the #1 Influencer network or it paying out millions to customers even though it’s only been around for a short while, really doesn’t give it too much credibility in my opinion too.

I mean come on, do you really think it’s possible that a system which literally has a domain age of just around 2 months could realistically have paid out $68m?

Well no right? It’s because what is being said within the sales page is overhyped BS and the data being used to try and entice some of the naive individuals out there, are purely used to grab your data. As far as I can tell nothing that VM states is real so in turn you shouldn’t even think about joining it.

Considering the data used to promote the system is fake along with its claims of working with huge brands like Wendy’s or apple, I’m pretty sure that it’s all being said to entice you to sign up and get a bunch of referrals too so that they can sell off your data to third parties.

This of course means no matter what you do or how much you see the money in your dashboard increasing, you will not get paid, instead what will happen is your data being exploited to benefit the pockets of the undisclosed owners and not you.

It’s A Rehash Of Other Similar Systems

The fact of the matter is that I’ve seen well over 10 of this exact scam on my website before, of course they have a slightly different layout and names but, they all tend to use very similar if not the same figures as well as use fake data to try and entice you.

A couple examples include Referral Pay, Viralbucks, MoneyRewards, viraldollars etc. This is obviously a huge red flag and a massive reason to avoid joining VM because it pretty much indicates VM is not going to work considering the huge number of name changes it’s had over the last few months.

There is absolutely nothing good that I can say about VM, what I can say is that you definitely should avoid VM because there’s more chance of your data being hacked and exploited by signing up over making even a cent with VM.

I can very confidently say that VM is a scam and there are a bunch of very concrete red flags that prove why I believe this to be the case.

The red flags include the use of overhyped claims, fake data to try and entice you, the lack of the owner being disclosed, the clear signs of it being a data harvesting scheme and the fact I’ve seen a bunch of other GPT systems with pretty much the same overhyped BS just make it so that I honestly can’t consider VM anything but a scam.

So definitely do skip out on it and look into something else if you’re serious about making money online.