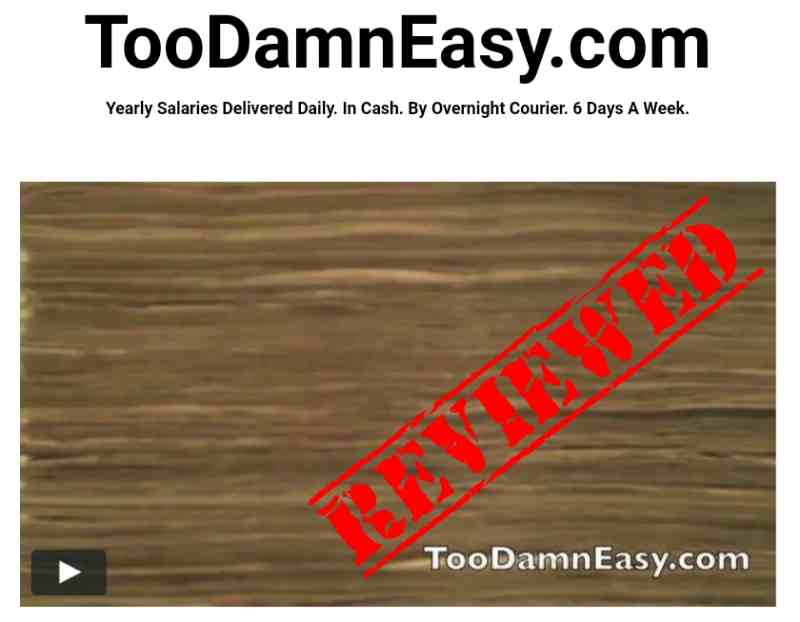 It’s likely that you have come across Too Damn Easy through an email list, on social media or got it recommended by a friend or family member.

Is Too Damn Easy a scam? The reasons why you’re here is because you have want answers right so, that’s what I’m going to provide for you within this Too Damn Easy review.

First and foremost I must commend you for actually doing a bit of extra research before committing to joining Too Damn Easy. For all you could have known, the product could be a major scam so the fact you’re here right now, researching whether or not that’s the case is a pretty smart move on your part.

To be fully transparent with you, I am personally not a member of Too Damn Easy so I can assure you that I will not attempt to sell you it unless of course it’s worth investing in.

What I will aim to do is provide you with an unbiased 3rd party look at Too Damn Easy that will hopefully help you to make the best decision you can in the end.

SUMMARY: I personally do consider Too Damn Easy to be a pyramid scheme and a scam so, it’s a wonder to me how it’s still around over 20 years later.

The overhyped claims, the fact there isn’t a refund policy, the product essentially being a really expensive pay to play system and the fact Q doesn’t really show up, all are very big red flags and are some really big reasons why you should think twice before investing your cash into this cash gifting scheme.

WHAT IS TOO DAMN EASY? 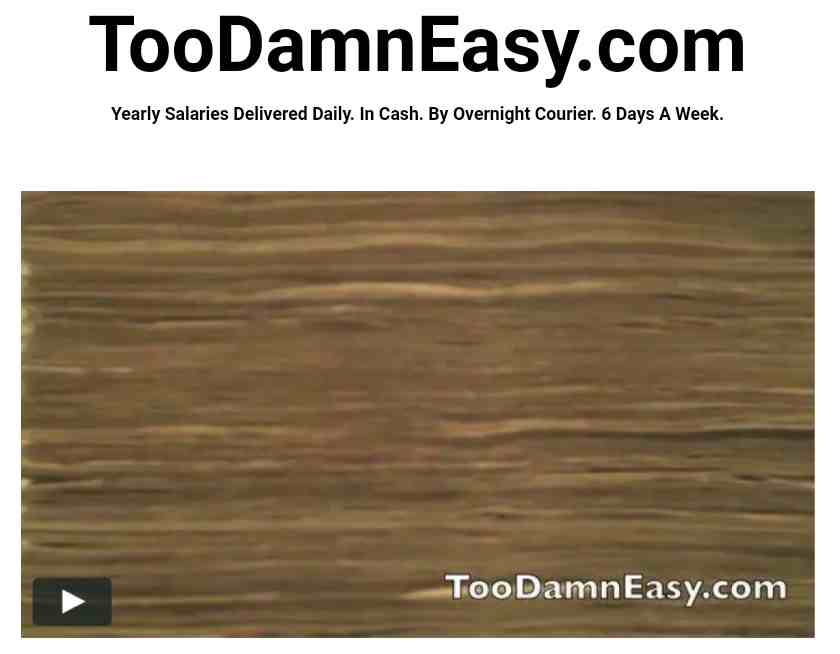 TDE is a cash gifting system that’s run by a faceless guy named Q and has for some been around since 1998 despite it not really having anything that’s actually worth anything if you were to join.

But, first things first, the sales video and even the sales copy definitely doesn’t help make it come across as a legitimate program. The video is like one of the many scam like systems I’ve reviewed except this time. It isn’t a slideshow type of video trying to entice you into joining by showing you all these luxury items, holidays beaches etc.

The video in this case is definitely a little unique but, it’s still very much like those other sales pitches as it still shows you stuff you really would like to get, in this case $60k in $100 bills. The video is basically Q counting his $60k whilst trying to convince you to join TDE, claiming it’s very simple and so on.

The whole sales pitch makes it come across as easy, through this cash gifting, supposedly you can make money on autopilot or even make thousands a week in a matter of months.

The truth is that I’ve checked out my fair share of cash gifting schemes and the fact is they’re not the most trustworthy of business models to pursue. In fact there are some high profile companies like Mobe and digital altitude, both of which used a similar system to TDE, that were called out as official pyramid schemes by the FTC whom utilised this strategy.

So the fact TDE has been around since 1998 is a little confusing to me. Of course, the age doesn’t really make TDE a credible company to join because the cash gifting model itself isn’t one that’s worth getting into and I’ll explain why throughout the rest of the review.

HOW DOES TOO DAMN EASY WORK?

If you decide to participate in this scheme, you should know that once you’ve sent your money off you will not be able to get it back. This is because TDE doesn’t sell any kind of legitimate product, whether it be tangible or online, you’re simply asked to invest a decent chunk of money, hoping that maybe someone else will do the same a make you money in the process.

You do actually get some instructions, in the form of a 25 page pdf file, on how you should follow the process and send your money to others, with the hope that Q’s system will basically automate everything for you.

As for how much the different packages cost, they include the following :

Yeah… It’s not a system that most will be able to afford and even if you could afford it, I definitely would not recommend you buy in because the whole system, you’ve got to admit, does come across as very fishy.

Now how exactly will you make money with TDE?

Simply put, the system will require you to buy 100’s of postcards so that it can send it off to people who may sign up to the system and then make you money. So all you need to basically do is invest a minimum of $2400 minimum, buy some postcards and then Q’s system will do the rest of the work for, you just have to wait and hope.

If you get a sale, because TDE is a cash gifting one, you’d get the entirety of the fee so, if some one were to buy a green dream tube package, you’d make $6k in pure profit.

As for the membership fee, that’ll probably go to Q himself.

In short TDE uses a upline MLM kind of structure where someone who buys a package directly under you will pay you the full amount as opposed to a typical commission structure where you’re paid a portion of the sale in profits that normal affiliate programs and MLM’s tend to use.

WHO IS TOO DAMN EASY FOR?

TDE is not a system I would recommend anyone get involved in. It’s mostly designed to make Q richer and maybe a few lucky guys but, you shouldn’t expect it to make you consistent income or anywhere near the $80k mark that Q supposedly made within his first 4 months.

Cash gifting schemes in my eyes are quite unethical so, by participating in it here you are not only going to mess up your credibility in the future but, it’s also unlikely to make you good money, after all most people will be suspicious of a postcard claiming it can make you a lot of money yet asks you to essentially mail a minimum of $2k to someone.

The claims of being able to make thousands a week or the quote at the top of the page saying how you can “generate yearly profits daily”, really does overhype the whole premise behind TDE.

Furthermore, all the claims regarding the system being automated and how Q will do all the work for you, once again, doesn’t really give you the full picture behind the system, the full picture being most people won’t invest in TDE because it promises insanely unrealistic things.

No legit business would promise thousands in profits for little to no work for newbies, they’d instead tell it how its is and give your realistic numbers to take into account. So, yeah that puts into perspective how much of red flag the overhype is in this case.

It Costs Way Too Much!

This is obviously a massive concern in my opinion. The fact that Q offers a package which is literally $100k is quite frankly, ridiculous.

Of course I don’t think anyone would ever go for that package but, even cheapest package package is insanely expensive too. The red dream tube package aka the starter kit, is still going to set potential prospects back $2400 minimum.

I don’t think you need me to tell you this is a little too much, especially when you consider TDE doesn’t offer anything of real value to its customers for the money.

Although I’m not too sure, I’d also assume that the system follows a pay to play kind of system where you’ll probably need to invest in the more expensive packages too in order to gain from the system.

This pay to play system is something that I’ve learned to be one of the core functions of pyramid like schemes, therefore the really expensive costs along with this very shady pay to play system are 2 very huge red flags when it comes to the business opportunity offered by TDE.

The Owner Doesn’t Show Himself

Q not showing himself in the video is another thing I’ve found to be common among scam like system.

The fact of the matter is that if you truly believe in a system you’d probably be more than happy to show your face to your potential customers however, the lack of a face to go with a the voice here is yet another red flag in my books.

This is yet another big problem because a minimum of a $2k investment is a lot to pay so, not having a refund policy makes the company in question seem like it doesn’t put the customer first, which is something a business should always do (to a reasonable degree at least).

A refund policy is one of the most basic ways to be customer first so, the lack of one with TDE is a red flag in my opinion.

Then again I guess the reason why a refund policy isn’t available is because TDE is a cash gifting scheme which means the affiliate tends to keep the entirety money and not the owner himself.

Although, this is still kind of a weak argument because Q could still optimise the whole thing to keep the funds on hold until a 30 day period has passed but, clearly as I said, Q and TDE isn’t aiming to put the customer first.

IS TOO DAMN EASY A PYRAMID SCHEME/SCAM?

I personally do consider Too Damn Easy to be a pyramid scheme and a scam so, it’s a wonder to me how it’s still around over 20 years later.

The overhyped claims, the fact there isn’t a refund policy, the product essentially being a really expensive pay to play system and the fact Q doesn’t really show up, all are very big red flags and are some really big reasons why you should think twice before investing your cash into this cash gifting scheme.

If So, This Make Money Online Guide I've Created Can You Help You Out!

I Wanna Make More Money, Show Me The Guide
x