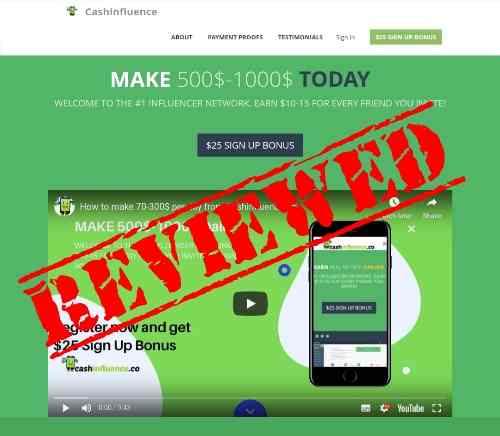 Welcome to my CashInfluence review!

It’s likely that you have come across CashInfluence through an email list, on social media or got it recommended by a friend or family member.

First and foremost I must commend you for actually doing a bit of extra research before committing to purchasing or joining CashInfluence. For all you could have known, CashInfluence may very well be a scam and rob you of your money so this review could help you find anything peculiar about it.

To be totally transparent with you I haven’t used CashInfluence so I can assure you that I will not attempt to sell you on it unless of course it’s worth investing in.

What I will aim to do is provide you with an unbiased 3rd party review of CashInfluence that will hopefully help you to make the correct decision in the end.

SUMMARY: Yes, CashInfluence is a scam and there are multiple reasons why I say and believe this.

It’s overhyped whilst using a bunch of unrealistic and false claims to entice people, the owners don’t ever show up, CashInfluence is one of many different variants of this exact scam and lastly the true purpose behind the system being to harvest your data are the main reasons why I cannot recommend anyone waste their time on this poor excuse of a GPT site. 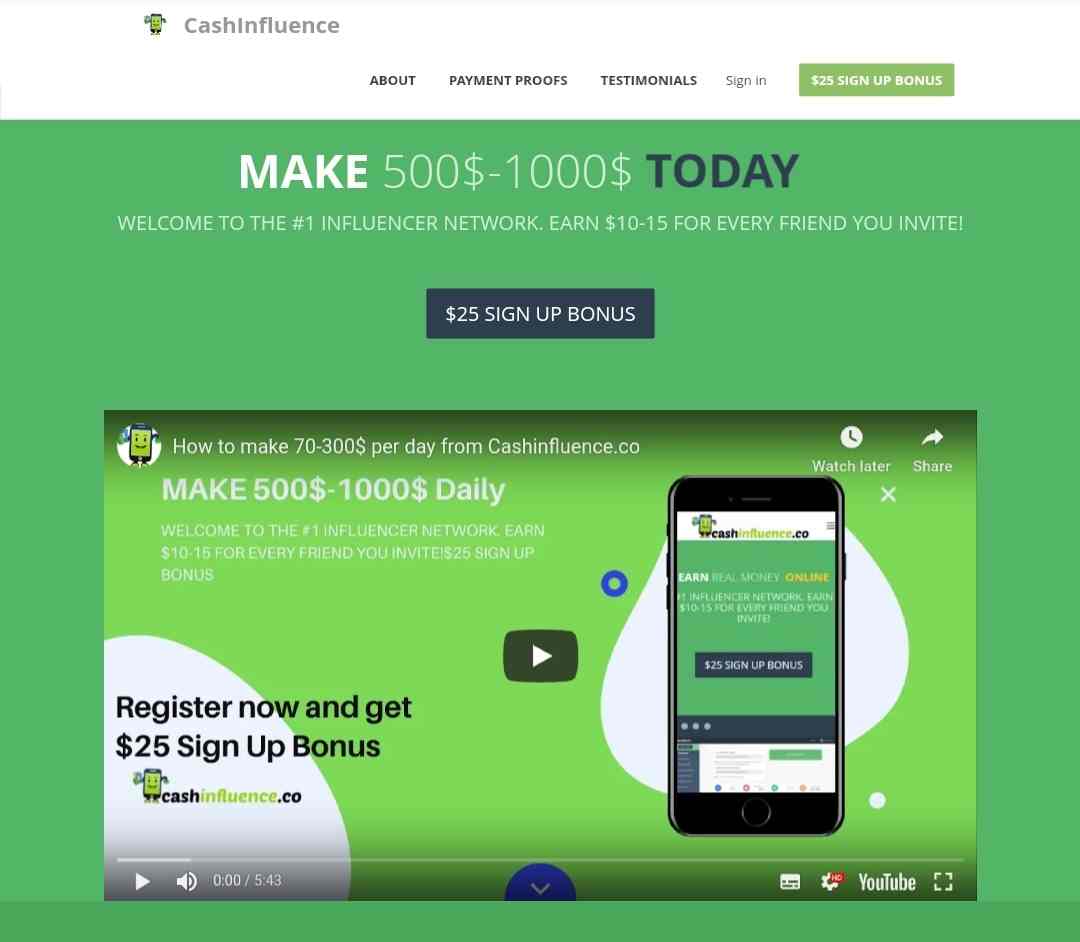 CashInfluence is yet another one of these overhyped GPT sites claiming to be the #1 Influencer Network, being able to make you upwards of $500 today and even $25 just by signing up.

Whenever ever a product or a service makes 3 ridiculous claims just on their front page within a couple of scrolls on the mouse or on your smartphone screen, there’s a pretty good reason at that point to be a little suspicious of said product.

So, it only makes sense to be very suspicious of CashInfluence. As I said, this isn’t the first GPT website I’ve checked out claiming everything CashInfluence is claiming within the front page, it’s more like the 30th or 40th one so, right off the bat when I saw those 3 familiar elements to it, I pretty much knew this particular system was a scam.

If you’re curious about the other variants, I’ll list a few of them below :

At this point I’ve established that CashInfluence is a scam but, throughout the rest of the review I’ll breakdown why so that you can understand my perspective a little better.

In short, CashInfluence of course will not work as is described on the tin, you certainly won’t make a $500 – $1k today, the sign up bonus of $25 won’t ever get paid out as it’s only a method used by the owners to get people to freely sign up and of course you won’t actually earn anything either when you sign other people up through your referral link.

Yeah your dashboard will likely show that your money is going up every time someone signs up under you however, that number shown there is fake.

Think about it for a sec, the threshold for one is likely to be around the $200 range, which frankly speaking is quite ridiculous for a GPT website so, what makes you think this new site with a threshold that high would ever pay out.

Your typical legit get paid to sites tend to have threshold normally around the $10 – $20 so CashInfluence being 10x – 20x times that is a major red flag in my books.

Of course there is a reason why the threshold is so high, it’s so that new members will continue to bring others in which means the owners will be able to collect to more data and ultimately sell it off to third parties. This is so that they can profit from your desperate desires of wanting to earn hundreds of dollars through a free to join system.

So, the basic premise behind CashInfluence is to collect the data of others in order to sell it off and not to help you succeed. It’s just a data harvesting scam, which in some cases can be dangerous.

The instances in which it may be most dangerous is if people who’ve collected the data use it to hack into your more confidential or important accounts (your PayPal, amazon, eBay and other important accounts) and compromise them.

CashInfluence obviously does not work as is described on the tin, it’s a data harvesting scam ultimately designed to gather data and sell it off to third parties therefore, it’s more so a scam than anything I could call legitimate.

CashInfluence is not a GPT system that I’d recommend anyone invest in because it simply will not work and in the worst case scenario could lead to one of your more confidential accounts being hacked and even completely compromised.

The unrealistic monetary claims being made within the front page from being able to make $500 – $1k today to the false claims of being the #1 Influencer Network and CashInfluence being around since 2015 and having won may awards just don’t make sense to me.

First of all CashInfluence’s domain itself appears to be less than a month (at the writing of this review) as you can see above and secondly no GPT site would be able to make individuals $500 in a day without the individual in question generating multiple tens of thousands of targeted traffic on a daily basis.

CashInfluence does seem to make a lot of overhyped claims and this ultimately is another problem with the system.

The owners not showing up to me implies that they know this system is a scam and one that probably won’t work out for you therefore, by hiding themselves they can escape any kind of backlash they otherwise would feel if they stood up for their product, even if said product were inevitably to be called out as a scam.

So this is another red flag in my opinion.

There Are Multiple Variations Of The System

At this point I’m sure that there are likely 40+ different variants of this exact scam, which to me is pretty huge red flag.

Ultimately the true purpose of CashInfluence is to harvest your data and nothing else. It’s purely designed to fill the pockets of the undisclosed owners so this is obviously another red flag and probably the biggest red flag at that considering this could lead to important accounts being comprised.

If there was anything good to say about CashInfluence I would say it but, there really isn’t. At this point it’s just your typical run of the mill GPT scam, nothing more and nothing less.

Yes, CashInfluence is a scam and there are multiple reasons why I say and believe this.

It’s overhyped whilst using a bunch of unrealistic and false claims to entice people, the owners don’t ever show up, CashInfluence is one of many different variants of this exact scam and lastly the true purpose behind the system being to harvest your data are the main reasons why I cannot recommend anyone waste their time on this poor excuse of a GPT site.