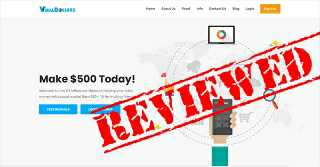 Welcome to my Viral Dollars review!

It’s likely that you have come across Viral Dollars through an email list, on social media or got it recommended by a friend or family member.

First and foremost I must commend you for actually doing a bit of extra research before committing to purchasing or joining Viral Dollars . For all you could have known, Viral Dollars may very well be a scam and rob you of your money so this review could help you find anything peculiar about it.

To be totally transparent with you I haven’t used Viral Dollars so I can assure you that I will not attempt to sell you on it unless of course it’s worth investing in.

What I will aim to do is provide you with an unbiased 3rd party review of Viral Dollars that will hopefully help you to make the correct decision in the end.

SUMMARY: Viral Dollars is, without a doubt in my mind, a scam and there’s a bunch of reasons I can list which back this point up.

The overhyped and unrealistic claims, the fake data used, the fake testimonials, the fact it’s a data-harvesting scam(a potentially very dangerous scheme) and how it’s one of many products that I’ve reviewed time and time again on this website make VD, in my eyes at least, a complete scam.

Therefore, I highly recommend avoiding it

WHAT IS VIRAL DOLLARS? 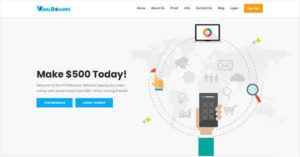 Viral Dollars claims to be the #1 incluencer network that works with brands like Wendy’s, Mcdonalds, fortnite and supposedly through them, they get paid to then pay you for completing tasks as a member which can also supposedly generate you $500 the day you start.

When you take into account everything you’re told, it’s pretty apparent to me that the whole system is trying to come off as a get rich quick scheme and there are a plethora of huge red flags that jump at me essentially proving the quick rich quick vibes VD has.

Firstly, it claims to be able to make you $500 in a day… doesn’t that claim alone come off as the biggest get rich quick scheme?

Then there’s the situation with how you get paid. Supposedly you make $25 as a sign up bonus and $10-$15 for every referal you bring in.

Moreover, VD even claims that you can make $2-$5 for every person who just clicks on your referral link…

This literally tries to make you believe that there’s super easy money to be made with VD because if just a click can make you upto $5, VD would be a gold mine for anyone looking to get involved.

However, the main reason why I know VD is not a genuine way to make money online is because firstly, GPT sites do not pay this kind of money to members, I’ve reviewed quite a few and it usually takes multiple months to even make $50 let alone $500 and secondly, this is a scam that I’ve reviewed and exposed multiple times o this website.

Just so you know that I know what I’m talking, I’ve reviewed multiple good and bad products on this website such as :

Which is why I believe I have a pretty good grasp on what makes a solid system to invest in or not.

HOW DOES VIRAL DOLLARS WORK?

The truth is that VD actually does not and likely will not work for you, it uses all this over hyped language, trying to associate itself with big brands, to make you think you’ll profit when in reality the whole purpose behind it is to take your data and exploit it by either selling it to third parties or use to hack into your personal accounts associated with the details.

This is something known as data harvesting and I’m sure you can guess that this isn’t a very good thing. If you think that it’s actually possible to make $500 in one day, as a beginner, then I’m going to be blunt with you in saying that there’s absolutely no chance of achieving it through VD.

Of course if you’re experienced online and have a decent sized following or able to reach a decent amount of people, it can be possible to make tons of money but, making $25 when you signup, $15 for referals and even the claims of making upto $5 from people if they click on your referal link, then we’ll, as I said that’s just not possible.

In my eyes VD just does not come of as trustworthy and even with the nice design of the page and the “testimonials”, I know that if you for some reason decide to join it, you’ll be taking a huge risk.

WHO IS VIRAL DOLLARS FOR?

VD is something that I would personally suggest no one get involved with and if you’ve already used your actual details to sign up to it, I suggest that you change your password as soon as you can and tell anyone else you’ve recommended to change their email passwords as well.

The reason why I don’t reccomend VD is due to the plethora of red flags it shows and when something shows as many red flags as VD does, it doesn’t make it a very trustworthy opportunity.

The overhyped and unrealistic claims that VD makes suggesting you can make $500 in a day or how it’s the number 1 influencer network are all, at least far as I can tell, full on lies.

Do you really think that VD has over 200k members and paid out almost $70m? If you’re thinking no then you’re absolutely right. The website itself is barely a few months old so how exactly can they have paid out that much and accumalated as many members as it has. 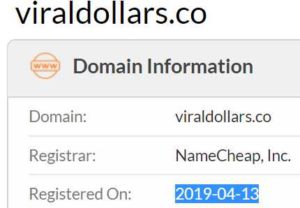 So, of course this element about VD is a big red flag and amongst the biggest reasons to avoid it.

Probably the biggest problem with VD that I have is the fact that the testimonials it uses are fake, they’re all actually just fiverr actors who’ve been paid to read a script. 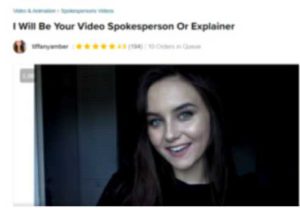 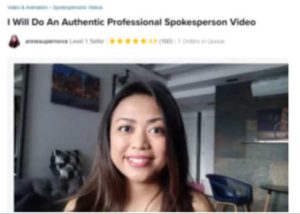 So it should go without saying that this is a huge red flag.

It’s a data harvesting which as I’ve said already is when a shady system basically collects your data and sells it off to a third party or even uses your data for shady things.

This can potentially be very dangerous for you which is why this is a big red flag and huge reason to avoid VD like the plague.

This isn’t the first time I’ve seen this very same or a very similar GPT site. In fact a couple of the other ones I’ve seen and exposed include notion cash, viral pay, kids have money, kids earn cash and a bunch more so, I know that VD isn’t a very trustworthy system.

This is a red flag to me because if a product literally changes its name or has multiple landing pages for it, ithe reason why is always because the product is shady or simply very low quality. In my eyes, I’m positive that VD falls into this boat so once again, you should skip out on it.

There’s nothing good going for VD, like literally nothing. You could say that it’s website design is somewhat appealing although that doesn’t really make up for every other things wrong with VD.

IS VIRAL DOLLARS A SCAM?

Viral Dollars is, without a doubt in my mind, a scam and there are a bunch of reasons that I can list which back this point up.

The overhyped and unrealistic claims, the fake data used, the fake testimonials, the fact it’s a data-harvesting scam (a potentially very dangerous scheme) and how it’s one of many products I’ve reviewed time and time again on this website and exposed make VD, in my eyes at least, a complete scam.

Therefore, I highly recommend avoiding it.