Welcome to my Swagpay.co review!

It’s likely that you have come across Swagpay.co through an email list, on social media or got it recommended by a friend or family member.

First and foremost I must commend you for actually doing a bit of extra research before committing to purchasing or joining Swagpay.co. For all you could have known, Swagpay.co may very well be a scam and rob you of your money so this review could help you find anything peculiar about it.

To be totally transparent with you I haven’t used Swagpay.co so I can assure you that I will not attempt to sell you on it unless of course it’s worth investing in.

What I will aim to do is provide you with an unbiased 3rd party review of Swagpay.co that will hopefully help you to make the correct decision in the end.

SUMMARY: I personally believe that SP is a scam and there are a number of reasons that point to this fact.

The overhyped and unrealistic claims made, the fact that it’s essentially a rehash of a few other similar GPT systems I’ve exposed, the issues with the owner not being disclosed and it being a data harvesting scam all add to the reasons why SP isn’t something that I’d recommend anyone to join. 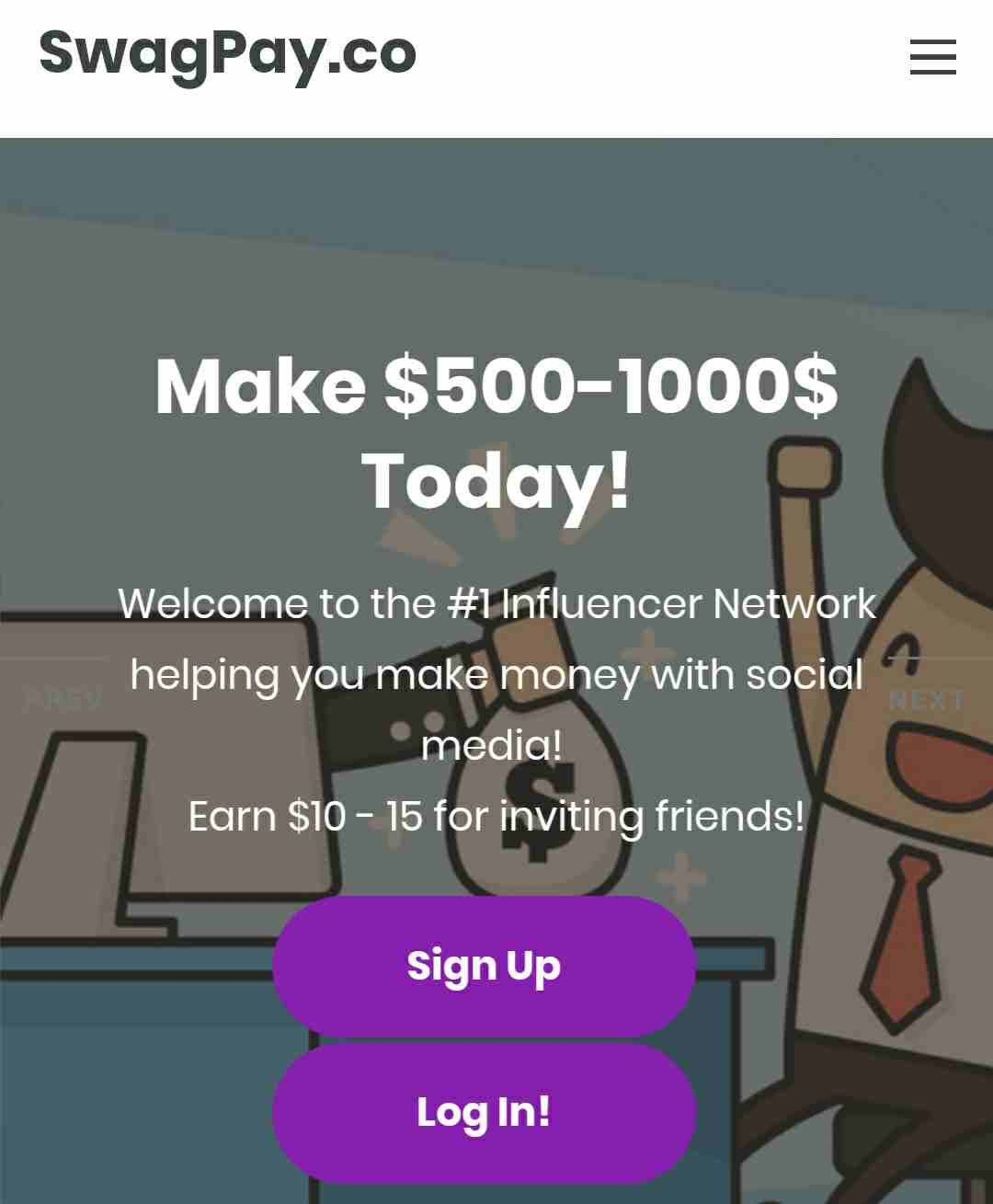 SP is yet another one of these never ending overhyped GPT sites which are primarily designed to fool people into signing up and not genuinely help them make $500 – $1k today, like what’s claimed in the sign up page.

SP tries to make itself come across as an awesome system that can make tons of money very easily for you but, when you take into account how much other legitimate GPT sites tend to pay their members, it’s hard to consider SP anything but another overhyped get rich quick scheme.

Throughout the rest of this review I’ll explain why SP won’t work and why you’re better off looking elsewhere if you’re looking to genuinely make money online and not get scammed.

I’ve also reviewed well over 100 products at this point on this website, such as ::

SP claims to be the #1 Influencer network and supposedly works with big companies like Wendy’s, macdonalds, apple and it’s because of these companies that they can pay members $10 for signing up referrals as well as around $30 or so for any other task completed in the members area.

All of these is of course quite a ludicrous proposition for a free to join site however, some members might get fooled if they did sign up because the money dashboard would be increasing.

The truth is, even if you did reach the threshold for the pay out (which is probably going to be anywhere from $150 – $300) unsurprisingly, the money earned wouldn’t be transferred to your PayPal beacause SP in reality, is a data harvesting system.

This means the main premise behind the system is to gather data from you and your referrals and eventually start spamming you along with your referra’s emails with junk offers or selling your data to third parties.

If for some reason you decided to use the same data to sign up to SP as you have for your PayPal or other important accounts, there’s even the possibility that those accounts could get hacked.

So, in short SP doesn’t work in the same way as other GPT systems, in fact there’s a zero percent chance you’ll make anything at all with it despite all the claims it makes beacause SP is a data harvesting scam and not a system that’ll make you money.

SP isn’t a system that I would recommend anyone to join because of the fact it isn’t a legitimate GPT site. There’s also a few other red flags that contribute to why I’m adamant in saying SP is a system that absolutely no one should join, especially people who are really looking for a genuine money making opportunity online.

When a GPT claims you can make upto $1000 today, it’s at that point where you should realise that it’s probably not a credible system.

Beyond that statement, there’s a bunch of testimonials claiming individuals have made $20k in 6 months or even over $100k with the system but, you have to remember that SP is still a GPT system and GPT systems are free therefore, does it even seem plausible for such a system to actually deliver on its claims or even be truthful when discussing “testimonials”.

Well, one thing I can say is that it’s highly unlikely that anything said within the sign up page is real because get rich quick schemes never really tend to live up to all the unrealistic claims they tend to make.

As I said above, SP is a data harvesting scheme therefore, the main purpose behind the system is to get your data and both spam it with junk mail and sell it off to third parties so that the undisclosed owners can profit.

SP is one of many variations of this exact GPT scam that I’ve reviewed and exposed. A few other variations include MoneyRewards, cloutpay, ViralMarkets.co along with a bunch others.

I know that a few of the variations have actually had their websites shut down which would imply the system in question is likely to be shady otherwise, why would they get shut down.

This is a pretty obvious red flag in my experience and a huge reason to look elsewhere if you’re looking to make money online.

The only positive about SP is the design of the website (which of course doesn’t really mean anything), besides this point there’s absolutely nothing good I can about SP so, obviously I’d highly suggest not signing up to it because you’ll be left disappointed.

I personally believe that SP is a scam and there are a number of reasons that point to this fact.

The overhyped and unrealistic claims made, the fact that it’s essentially a rehash of a few other similar GPT systems I’ve exposed, the issues with the owner not being disclosed and it being a data harvesting scam all add to the reasons why SP isn’t something that I’d recommend anyone to join.