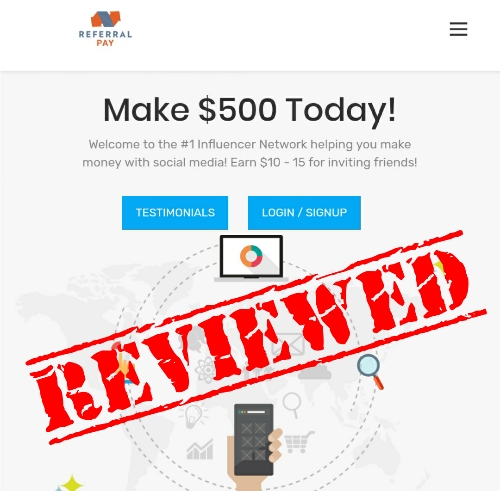 Welcome to my ReferralPay review!

It’s likely that you have come across ReferralPay through an email list, on social media or got it recommended by a friend or family member.

First and foremost I must commend you for actually doing a bit of extra research before committing to purchasing or joining Referal Pay. For all you could have known, ReferralPay may very well be a scam and rob you of your money so this review could help you find anything peculiar about it.

To be totally transparent with you I haven’t used ReferralPay so I can assure you that I will not attempt to sell you on it unless of course it’s worth investing in.

What I will aim to do is provide you with an unbiased 3rd party review of ReferralPay that will hopefully help you to make the correct decision in the end.

SUMMARY: One thing that I can assure you of is that RP is definitely a scam and not a system that you’ll genuinely be able to make money through.

The unrealistic claims and the fake data used, the fact it’s a data harvesting scheme, the lack of an owner and the other issue of it being a rehash of multiple other scams I’ve reviewed make it highly unlikely, in my eyes at least, for RP to be anything but a scam.

Thereofore I strongly recommend you don’t sign up to it and tell others to skip out on it too by sharing this review around.

WHAT IS REFERRAL PAY? 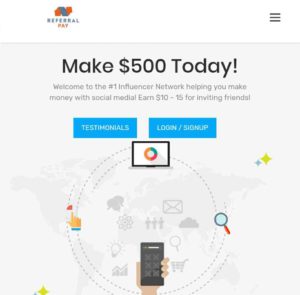 The moment I landed on RP’s landing page I knew that it definitely wouldn’t live up to the claims it was making because it was just another rebranded landing page for a scam that I’ve literally exposed around 10 or so times on this website.

There’s actually a lot of signs and similarities to this and the likes of viral dollars and viral pay with the ridiculous claim of being able to make $500 today or the $25 sign up bonus, the huge amounts of cash you make for completing tasks and all the plethora of red flags it shows.

On the surface the whole system may look, to the unsuspecting person at least, as something that they should get involved in, like a big money making opportunity that they’d miss out on if they skipped it but, in reality this is exactly how RP wants you to feel, they want you to believe you can get rich quick with their system and in turn benefit them.

Referral Pay frames itself as a get paid to site but, in reality it has ulterior motives that aren’t all that likely to benefit you at all.

HOW DOES REFERRAL PAY WORK?

The reality is that RP’s main purpose is to harvest your data and not to help you make upto $50 “for completing tasks”, in essence RP is a data harvesting scam.

If you think about it, right from the start you’re told things that literally no legit GPT site claims so how likely a scenario do you think it would be for RP to somehow deliver on this.

Furthermore, the aspect of it being able to make $500 today depicts it as a get rich quick scheme along with the fake data uses and it supposedly working with huge brands like Wendy’s or McDonald’s doesn’t make this opportunity all that believable.

Even RP being the #1 influencer network doesn’t make much sense because if it genuinely was #1 I’m sure it wouldn’t be so obscure and hard to find, wouldn’t other popular influencers be promoting it if it was the actually the #1 Influencer site?

So, RP essentially works as a way for the undisclosed members to harvest your personal data if you sign up with the likely purpose of selling it off to third parties for their own benefit.

This scam can be potentially very dangerous too because if you were to use the same email address and password to sign up to RP as you have for most of your other accounts, the third parties could potentially use it to hack into some of your confidential accounts and maybe steal or delete them, which I’m sure is something you definitely don’t want happening.

WHO IS REFERRAL PAY FOR?

RP is something that absolutely no one should get involved with because there literally is nothing that will come out of it. Not the ability to cashout $500 in one day or making up to $50 for completing a task or even upto $5 from people just clicking on your referral link.

Don’t expect anything to work if you decide to join RP because that’s not what it was designed to do.

There are a bunch of get rich quick like elements from RP’s landing page from the claim of you making $500 today or earning around $15 from people signing up.

These claims along with the supposed fact RP works with huge brands is also a pretty big reason to be skeptical about anything RP claims has happened or will happen. 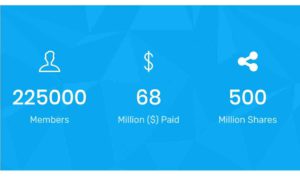 Even the data they use to back up their legitimacy is also fake, think about it for a second how likely do you think it is that a relatively new company like RP could have paid out $68m or have over 200k+ members? Yeah it’s pretty unlikely right.

The age of the domain name itself literally discredits any claims being made because how can a company that’s less than a few months old achieve such high numbers. Obviously they can’t so I’m pretty sure the data they use and pretty much everything else stated within the landing page has a high liklihood of being fake.

The fact it’s a system that primarily wants your data, as in your email address and password over genuinely wanting to help you make money is pretty evident to me beacause of all the get rich quick like elements it shows within the sales page to entice you.

The fact such a system would even be free makes it pretty clear that RP is a data harvesting Scam. Even if RP wasn’t designed to harvest your data it at the very least would not be trustworthy due to how outlandish its claims were so in my eyes it would always be looked as being a dud system and not legitimate at all.

The owner not showing up is another big red flag in my eyes because it shows that the person behind everything doesn’t believe in RP enough to support it publicly.

In my experience when an owner doesn’t usually show up, the product in question is more often than not a scam and honestly, RP probably does fall under this same bracket.

This actually is very similar if not identical to other landing pages minus a few minor design differences to a bunch of other scams I’ve exposed on this website. These include the likes of cashooga, viral pay, viral bucks, kids earn cash and a quite a bunch more.

What this constant change in the name and design of this data harvesting system, to me, implies that RP isn’t actually legitimate and is more likely than not a scam that absolutely will not make you any kind of money and can actually be a somewhat risky endeavour, even though it’s free to join.

There’s literally nothing good I can point out about RP, it’s just a scam and nothing more. Maybe you could say its website design is pretty decent but, besides this completely irrelevant positive point to the system, there’s nothing good I can say about RP.

IS REFERRAL PAY A SCAM?

One thing that I can assure you of is that RP is definitely a scam and not a system that you’ll genuinely be able to make money through.

The unrealistic claims and the fake data used, the fact it’s a data harvesting scheme, the lack of an owner and the other issue of it being a rehash of multiple other scams I’ve reviewed make it highly unlikely, in my eyes at least, for RP to be anything but a scam.