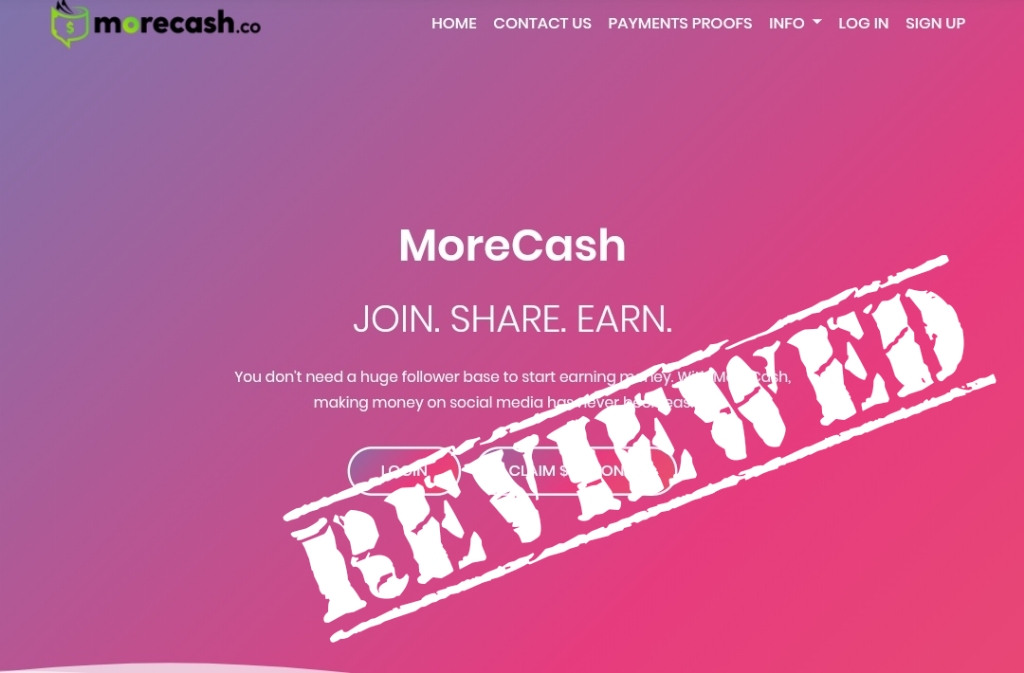 Welcome to my Morecash.co review!

It’s likely that you have come across Morecash.co through an email list, on social media or got it recommended by a friend or family member.

First and foremost I must commend you for actually doing a bit of extra research before committing to purchasing or joining Morecash.co. For all you could have known, Morecash.co may very well be a scam and rob you of your money so this review could help you find anything peculiar about it.

To be totally transparent with you I haven’t used Morecash.co so I can assure you that I will not attempt to sell you on it unless of course it’s worth investing in.

What I will aim to do is provide you with an unbiased 3rd party review of Morecash.co that will hopefully help you to make the correct decision in the end.

SUMMARY: Yes Morecash is a scam as it’s pretty much a rehash of one of the popular ones online nowadays.

There are a bunch of reasons why I believe this to be the case and they include its use of unrealistic and false claims, its lack of an owner who actually shows up, the fact it’s more or a less a rehash of some other very similar scams that I’ve exposed and of course it being a data harvesting is a pretty big reason to avoid Morecash too.

In short it’s not a system that if recommended you or any other person for that matter should waste their time as it will not benefit you in the slightest. 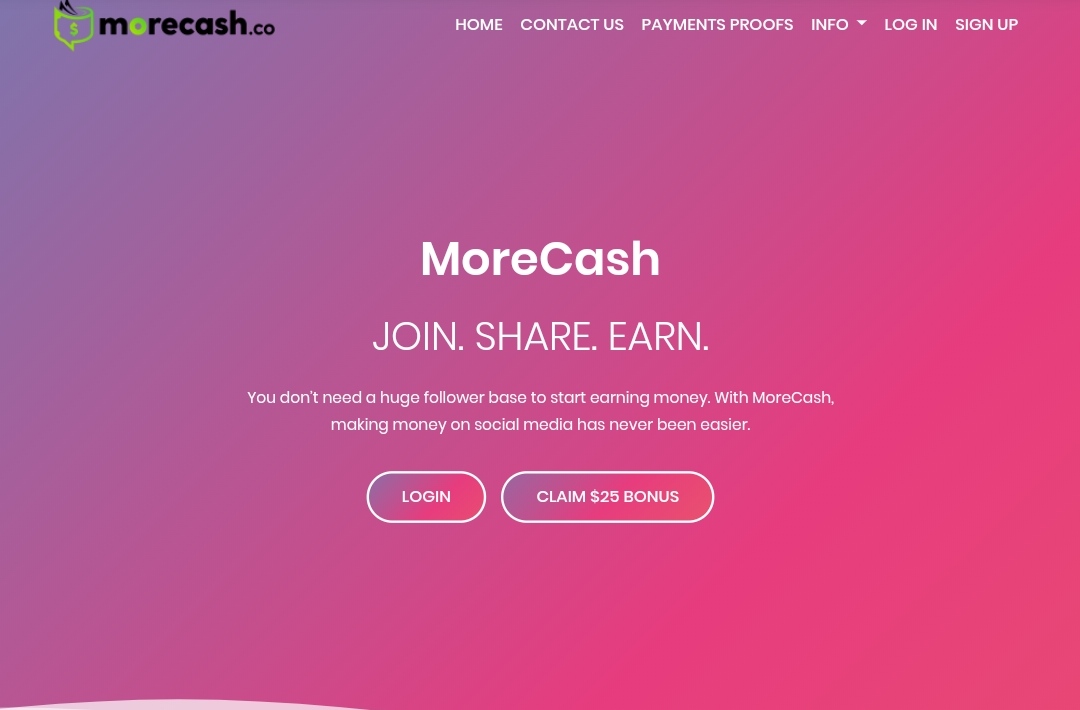 Morecash is yet another overhyped GPT based company claiming you can make $25 from just signing up, $20 for getting people into the website using your referral link.

It claims that you can basically make a lot of money with little to no work and without a decent sized following.

Here’s the thing, I’ve reviewed a countless number of pretty much the same type of systems over the years and I can tell you now that Morecash is probably not going to deliver on any of its promises.

As for the other variations of this system that I’ve personally seen and reviewed, a few of them include :

If at this point you’re still on the fence about the opportunity, throughout the rest of the review I’ll breakdown why I believe that morecash isn’t a legitimate company and why you along with everyone else who’s somewhat interested in it should give it a miss.

HOW DOES MORECASH WORK?

In reality Morecash will not pay your $25 for just signing up nor will it pay you $20 for signing others up. If you just think about it for a second or if you have some experience with make money online opportunities, I’m sure you know that whenever a system or product suggest something that’s too good to be true, it more than likely will be.

These claims are even more absurd when a free to join get paid to site offers every new member a $25 sign up bonus. Moreover, in the members area you’ll even find simple task that pay out ludicrous sums, whether it be $40, $50+ and another crazy thing is that you’ll supposedly even make a couple dollars everytime some clicks on your referral link too.

So yeah, I’m sure you can agree with me here in saying that Morecash’s opportunity is way too good considering it’s a free to join opportunity.

In short I’m 100% certain that even if you do the tasks and see the money in your dashboard increasing,never not ever get paid out.

Therefore, there’s clearly an ulterior motive here. Having seen a bunch of these schemes, I believe that there are two motives behind Morecash.

As for the second motive, it’s to gather data and either sell that data to third parties or simply spam your email address with other offers to hopefully make more money for you.

Neither of these are beneficial for you of course and the data harvesting side of things could even be very problematic especially if the data used to sign up is the same as a users PayPal account and other important accounts.

WHO IS MORECASH FOR?

Morecash is a system that I don’t believe anyone should get involved with because it simply doesn’t work.

When a GPT site claims it can make you $25 for just signing up, at that point you have to be super suspicious already considering how large an amount that is. Furthermore, when a GPT site offers multiple $40+ tasks in the members area… Well you get my point these figures are simply way to unrealistic for this type of opportunity.

On top of this Morecash uses fake data to try and entice its members into joining, claiming to have paid out over $900k dollars and having nearly 90k members.

These figures aren’t anything too insane as I’m sure some of the more established entities have achieved them however, Morecash is literally 5 months old according to its domain age so these figures do just seem way to unreasonable and of course unrealistic.

In fact I’m pretty sure that they’ve been using these fake stats since the domain was registered and in turn the use of these stats along with the unrealistic payments are red flags in my books.

The owner or owners not showing up is another red flag. This is an opinion I’ve developed having seen hundreds of products and services over the years. I’ve found that whenever the owner doesn’t show themselves, whether it be on the video, about us page or even on the internet as a whole, the product more often than not is a scam.

Therefore, the lack of an owner here is a factor you should take into consideration regarding Morecash legitimacy.

There Are Multiple Variations Of This Scam

As I mentioned much earlier in the review, I’ve actually checked out and exposed many many different variations of this exact scam so, the fact Morecash more or less identically mimics those other sites bar a few design differences is a huge red flag and clearly a very big reason as to why you should probably avoid the system at all costs

This plus making money from your naivety in doing the tasks in the members are how the undisclosed owners will make money.

Even on their privacy policy they state that they will share your personal information with third parties and vendors which simply means that they’ll more than likely sell it to others to make money and of course will probably spam it with more CPA affiliate offers and so on.

There is literally nothing good about Morecash, which should pretty much display what I think of this scheme.

IS MORECASH A SCAM?

Yes Morecash is a scam as it’s pretty much a rehash of one of the popular ones online nowadays.

There are a bunch of reasons why I believe this to be the case and they include its use of unrealistic and false claims, its lack of an owner who actually shows up, the fact it’s more or a less a rehash of some other very similar scams that I’ve exposed and of course it being a data harvesting is a pretty big reason to avoid Morecash too.

In short it’s not a system that if recommended you or any other person for that matter should waste their time as it will not benefit you in the slightest.