It’s likely that you have come across Quantum Supremacy MLM through an email list, on social media or got it recommended by a friend or family member.

First and foremost I must commend you for actually doing a bit of extra research before committing to joining Quantum Supremacy. For all you could have known, the product could be a major scam so the fact you’re here right now, researching whether or not that’s the case is a pretty smart move on your part.

To be fully transparent with you, I am personally not a member of Quantum Supremacy so I can assure you that I will not attempt to sell you it unless of course it’s worth investing in.

What I will aim to do is provide you with an unbiased 3rd party look at Quantum Supremacy that will hopefully help you to make the best decision you can in the end.

TYPE OF PRODUCT: “health and wellness” based MLM

SUMMARY: Although Quantum Supremacy is not officially recognised as a pyramid scheme or a scam, considering the lack luster and frankly fake product along with heavy reliance on recruitment for success, I still believe that there’s a very good chance that it could become one in the future.

Along with the 2 points above, the fact both founders have previously promoted a ponzi scheme and the likelihood that Alex is only using QS to push his other products, does not make QS a worthwhile endeavour to partake in as it’s more than only a hoax designed to make the owners more wealthy and no one else.

WHAT IS QUANTUM SUPREMACY?

Quantum Supremacy is quite the peculiar product where they sell hologram wristbands that can supposedly improve your life in a number of ways but, I’ll get to that in a second.

Firstly, you should know who the individuals behind QS are. As far as I could find there are 2 guys behind this MLM, the first being Alexander (Alex) Loyd who appears to be a Naturopathic Doctor.

The second guy is called Larry Vaiper. It’s not exactly clarified what their positions are within QS however, as they both seem to host webinars together when talking about QS, I can only assume that they are probably the top dogs within the company.

One thing worth noting which kinda shuns them a little is the fact that both of them were promoters of OneCoin not too long ago.

If you don’t know what OneCoin is, it’s a crypto ponzi scheme that was exposed recently so, the fact both individuals promoted it shows that they’re not necessarily the most trustworthy of individuals as they’ve already shown they’re willing to make a quick buck by promoting a quite clear ponzi scheme.

This doesn’t necessarily make QS a scam however, it’s definitely a fact you should take into consideration before going any further with the company. 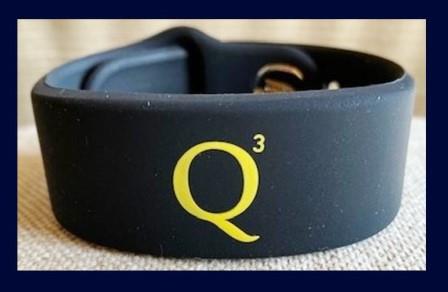 As I’ve already mentioned, QS’ main product is a wrist band that produces holographic waves aimed to improve your health. It seems to have a lot of benefits according to it’s marketing such as :

To me this all sound just a little to good to be true. Furthermore, there isn’t any form of evidence backing the above results which is why I’d take everything mentioned with a grain of salt.

As for how much the wristbands cost, it retails for $200 whilst a three-pack is also available for $500.

HOW DO YOU MAKE MONEY WITH QUANTUM SUPREMACY?

As is the case with pretty much all MLM businesses there are 2 ways to make money with them, Quantum Supremacy being no exception.

If you want to join and ultimately promote QS to others, it will set you back $80.

So it is quite cheap to join however, considering you’ll also need to buy the hologram wristband which is more than likely a fake product, paying over $200 to promote, what looks to me like a fake product, is probably not worth it it in my opinion.

In order to qualify for the compensation plan you’d need to first follow the 3 steps laid out by the company:

From what I can see, the barrier to entry is far higher than most other MLM’s I’ve checked out so even getting to the stage where you’d be able to earn with QS will be very hard for the majority of individuals to do.

If you make a sale personally, QS states it will pay its affiliates $30 and $70 depending on whether the single wristband or bundle is sold.

Affiliates can also make $5 and $10 from the sales their personally recruited affiliates make.

Provided you meet the 3 step criteria above QS also allows its affiliates to make commissions residually using a 2-up based  unilevel structure.

What this means is that an affiliate will be able to earn infinitely horizontally but vertically the earning will be capped. In this case the earnings are capped at the 5th level.

However, because the 2-up model is used the commissions from your first 2 recruits will be passed up to your direct up line. It’s only once you’ve recruited a third individual underneath you when you’ll start making residual income yourself.

You’ll be paid out the following amounts once the above criteria is satisfied :

Recruitment Is Essential For Success

The whole model is completely reliant on your ability to recruit as is futher pushed by the fact you’d need to recruit at least 2 people in order to fully start earning residually.

Although technically it may be possible to make a good income through just retail sales, considering the product is pretty much a bust, I’m sure most people would then attempt to recommend the money making opportunity instead which in turn would result in recruitment being pushed more heavily.

However, the fact recruitment is pushed so heavily within QS is a major red flag and an element that the FTC would deem as a pyramid scheme like characteristic so, definitely be very careful if you’re seriously think QS is a business opportunity worth pursuing.

The Wristband Is Just A Fake Pseudo Science Item

Not only is the wristband $200 but it’s also marketed like a miracle item of sorts with all these ridiculous health claims being made by QS and their marketing team.

The thing is there is not scientific evidence backing the potential health benefits of holographic healing so the fact this wristband (which mind you could be bought from just about anywhere for a couple bucks) is not legitimate and would just be a waste of time for anyone who was conned into purchasing one.

One of the company’s objectives is likely to move customers over to Alex’s other company called “Halo” where he will likely attempt to upsell customers on his other pseudo scientific endeavour this time involving the use of lights and their ability to heal you.

These light based products can be anywhere from $4997 for the basic package and can go as high as $19997!

I personally think these halo flashlights he sells are a bunch of baloney much like the wristband sold within QS.

The Owners Have A Somewhat Shady History

Both Alex and Larry have worked with a ponzi scheme in the past called OneCoin.

This is another concern worth noting because a lot of the times money hungry guys like Alex and Larry tend to promote these ponzi schemes just to make a few bucks so I wouldn’t look past them actually creating their own pyramid schemes.

There is literally nothing good about QS and the business opportunity it provides.

I get the impression that it’s merely a product based pyramid scheme that will not work out for the majority and probably will go under in the near future as it is promoting a fake pseudo scientific product.

IS QUANTUM SUPREMACY A PYRAMID SCHEME/SCAM?

Although Quantum Supremacy is not officially recognised as a pyramid scheme or a scam, considering the lack luster and frankly fake product along with heavy reliance on recruitment for success, I still believe that there’s a very good chance that it could become one in the future.

Along with the 2 points above, the fact both founders have previously promoted a ponzi scheme and the likelihood that Alex is only using QS to push his other products, does not make QS a worthwhile endeavour to partake in as it’s more than only a hoax designed to make the owners more wealthy and no one else.