Welcome to my Wiredbucks.com review!

It’s likely that you have come across Wiredbucks.com through an email list, on social media or got it recommended by a friend or family member.

First and foremost I must commend you for actually doing a bit of extra research before committing to purchasing or joining Wiredbucks.com. For all you could have known, Wiredbucks.com may very well be a scam and rob you of your money so this review could help you find anything peculiar about it.

To be totally transparent with you I haven’t used Wiredbucks.com so I can assure you that I will not attempt to sell you on it unless of course it’s worth investing in.

What I will aim to do is provide you with an unbiased 3rd party review of Wiredbucks.com that will hopefully help you to make the correct decision in the end.

SUMMARY: Wiredbucks is a scam in my opinion and a pretty common one at that. 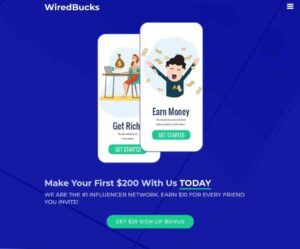 Wiredbucks is yet another one of these GPT sites that claims a bunch of ridiculous things. From the crazy $25 sign up bonus to the claims it making you $200 today and even being the #1 Influencer Network.

Here’s the thing, I know that Wiredbucks will not deliver on any of its promises because I’ve exposed a whole both of websites just like this one over the years.

These other variations include the following :

Which is why if I were you I’d definitely not waste anytime with Wiredbucks. But if you’re still unsure, I’ll be breaking down the main reasons why I do not think it’s worth joining this GPT scam throughout the rest of this article.

The fact is that Wiredbucks will not work as is claimed within the sign up pages of the website. I can pretty much guarantee that you will not make $25 for signing up, make $10 per referral, make upwards of $40 per task in the members or even $200 today.

Even if your money dashboard shows your numbers increasing, it doesn’t mean that it’ll ever be paid out to you.

The true motive behind Wiredbucks is to make money off of your naivety.

Having seen my fair share of “#1 Influencer Networks” like Wiredbucks, I’ve come to conclusion that there are 2 main purposes behind these entities.

The first motive is to grab your data and either sell it to third parties or use it to send you more spam offers and affiliate offers to increase their profits.

Although this isn’t likely, there’s also the chance that the data Wiredbucks gather could result in them hacking into your important accounts online such as your PayPal account, amazon or a bunch of your other confidential accounts provided the signing in data is the same for all of them.

So, if you’ve used the same data to sign up, I’d highly recommend you go about changing your details for the more important accounts.

The secondary motive is to make money every time you complete one of the $40 offers in the members area.

Essentially what will happen is that whenever you complete an offer, the undisclosed owners will make a couple bucks. This is because they’ll benefit from what is known as a CPA affiliate offer.

All in all, Wiredbucks is only designed to benefit the owners and no one else.

Wiredbucks is not a system I would suggest anyone waste their time on because it won’t benefit you in the slightest. In fact it could even be a little dangerous if you naively use important data to sign up.

It Uses False And Overhyped Claims

The Overhyped and frankly false claims of being able to pay $25 “for signing up”, up to $200 today and even being the #1 Influencer Network just aren’t true.

Firstly, I don’t know of any legitimate free to join task based website that offers such a ridiculous bonus. Even those that have been around for a long time only seem to offer a $5 bonus and tasks at most tend to be $10 with most being around $1 – $5 if not less.

Secondly there’s no way it could be the #1 Influencer Network anyways because according to Wiredbucks domain age, it was only registered in late April 2020.

It also claims to have paid out $400 million plus to members, which obviously is too ridiculous to be true. On top of this their address is fake too.

I’m sure you can see why I consider this as a not so good thing and a pretty major red flag as a whole.

I’ve found that whenever the owner behind a product or service is unable to show their face and ultimately associate themselves with their company, more often than not that institution does turn out to be a scam.

This is personally how I views things anyways therefore, this is a pretty big red flag in my books.

There Are Multiple Variations Of This Scheme

Wiredbucks is not the first variation of this exact scam that I’ve exposed which is yet another major red flag as no legitimate company that I know of would have hundreds of rehashes scattered around the web.

As I mentioned above, other than making money from commissions, the other main objective and probably the more harmful objective Wiredbucks employ is this data harvesting side of things.

I’m sure for most individuals, although a nuisance, it will be harmless however, for those who weren’t careful when signing up, their data could potentially be used to hack into some of their more important accounts like PayPal and possibly compromise them.

Therefore, just to be safe I would advise you change your passwords for accounts you don’t want to get hacked into of you’ve already signed and if you haven’t signed up yet, I hope you keep it that way.

There is literally nothing good about Wiredbucks, it’s simply a GPT scam you should avoid.

Wiredbucks is a scam in my opinion and a pretty common one at that.

So, unless you just want to check out the platform for yourself without thinking it’ll make you money, there’s no reason for you to waste any of your time on this scam.