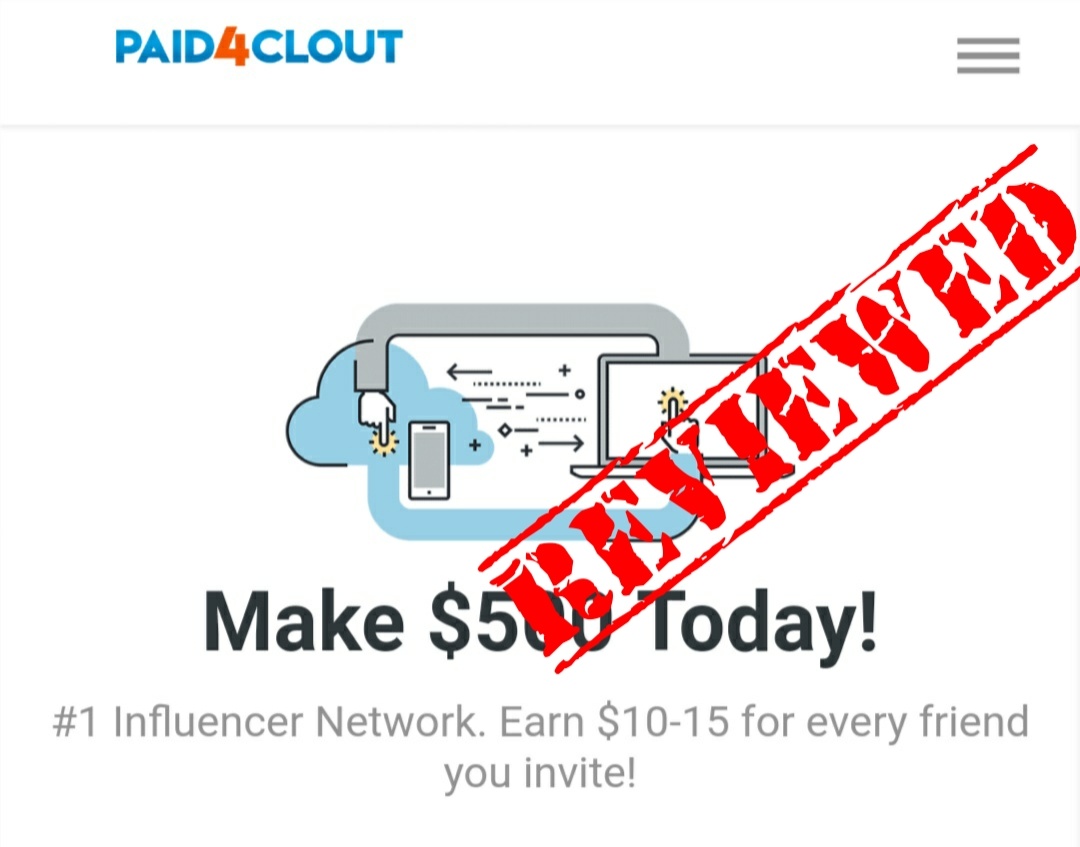 Welcome to my Paid4Clout review!

It’s likely that you have come across Paid4Clout through an email list, on social media or got it recommended by a friend or family member.

First and foremost I must commend you for actually doing a bit of extra research before committing to purchasing or joining Paid4Clout. For all you could have known, Paid4Clout may very well be a scam and rob you of your money so this review could help you find anything peculiar about it.

To be totally transparent with you I haven’t used Paid4Clout so I can assure you that I will not attempt to sell you on it unless of course it’s worth investing in.

What I will aim to do is provide you with an unbiased 3rd party review of Paid4Clout that will hopefully help you to make the correct decision in the end.

SUMMARY: I believe that P4C is a scam and there are a bunch of red flags that expose this.

The overhyped and unrealistic claims, the owner not being disclosed, the fact that the system is essentially a data harvesting scheme and the other issue with it being a rehash of other similar systems I’ve exposed, are more than big enough reasons for me to consider it as a scam and not something that genuinely works. 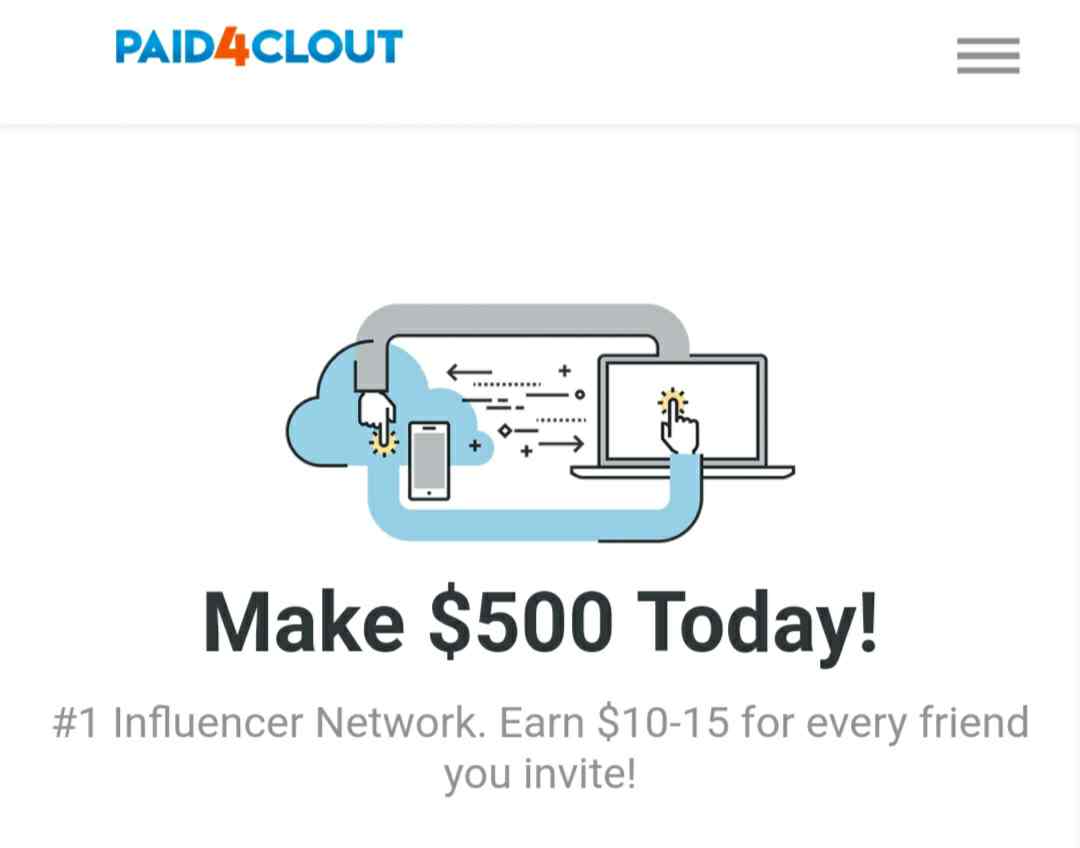 P4C from the looks of it, is another one of these GPT systems that promises some absurd figures such as you being able to make $500 today, earn $10 for every referral as well as make you $25 as sign up bonus when in reality they can’t live up to these promises.

The truth is that this is just another data harvesting scheme made be the same undisclosed owners of a couple other, essentially identical websites and GPT system’s I’ve checked out and exposed recent, such as Cloutpay.co and UrbanSurMoney.

These sites seem to pop up all the time now, with lots of them closing down within a few months and changing into a new website with the same ridiculous claims.

Throughout the rest of the review I’ll go over why P4C won’t actually help you earn the figures it claims.

Just so you know I know what I’m talking about when it comes to scams, I’ve reviewed a lot of products on this site such as :

That’s why I believe I have a pretty solid idea on what makes a good or a bad product.

P4C isn’t designed so that you can make money by completing tasks or even by referring people to it, the reality is that the purpose behind the system is so that the undisclosed owners can harvest your data and sell it to third parties for their own profit.

Right now you may not be convinced but first, let me ask you this, P4C claims that it’s the number #1 Influencer network, have you ever seen anyone promote it?

Lastly P4C claims that it actually pays you money from the ad money and sponsorship it receives from these big name brands they work with but, does that actually explain how they can pay you $20+ for completing tasks even though it’s a free to join system?

I just can’t see P4C realistically paying out whatever it claims it can so, i can logically only make out that all this overhype is done so that it can harvest your data and do whatever they want with collected data.

Either way, P4C won’t be doing whatever you want it to so, keep this factor in mind before naively putting your actual details into the sign up box.

P4C is not for anyone and there are a fair few huge red flags that suggest why so, if you’re looking to join a free GPT system that actually will pay you and functions well, don’t sign up to P4C because it won’t deliver.

Making $500 Today Or $25 when you sign up is highly unrealistic when you take into account most GPT sites that are legit, pay $1 – $2 for completing tasks and not $20+ for completing one.

The reality here is that you will not get paid out anything even if the dashboard in the members area shows you’re making money because, firstly it’s highly unrealistic and secondly considering the age of the website being barely a month old, it also makes it a highly realistic thing to assume and agree with the fact P4C works with huge brands.

All in all, P4C is definitely overhyped and this is a red flag in my books.

The lack of the owners being disclosed is something I find to be very common among low quality or scam products so the fact we never get to see who the actual owners of P4C are doesn’t give it a very good leg to stand on.

P4C’s main purpose isn’t to provide you with a money making opportunity but instead to use whatever data you provide within the sign up form to make money for themselves.

Expect to be spammed by P4C and other third party individuals if you do join for some reason so, I would suggest to look elsewhere if you don’t want your email accounts to be “harassed”.

I’ve reviewed and exposed multiple other variations of the exact scam, some of which include UrbanSurMoney, moneyrewards.co, Cloutbucks.com, Viralbucks and so on.

So, the fact there are multiple variations of this system is pretty telling of the motivation behind the scheme, if P4C was a genuine system, why would there be so many variations of it?

It’s most likely because the site itself is illegitimate.

Besides maybe the websites design, there’s literally nothing good that I can say about P4C, so yeah it should go without saying at this point that P4C isn’t a GPT site worth joining.

I believe that P4C is a scamscam and there are a bunch of red flags that expose this.

The overhyped and unrealistic claims, the owner not being disclosed, the fact that the system is essentially a data harvesting scheme and the other issue with it being a rehash of other similar systems I’ve exposed, are more than big enough reasons for me to consider it as a scam and not something that genuinely works.