It’s likely that you have come across SalesVision through an email list, on social media or got it recommended by a friend or family member.

Is SalesVision a scam? The reasons why you’re here is because you have want answers right so, that’s what I’m going to provide for you within this SalesVision review.

First and foremost I must commend you for actually doing a bit of extra research before committing to joining SalesVision. For all you could have known, the product could be a major scam so the fact you’re here right now, researching whether or not that’s the case is a pretty smart move on your part.

To be fully transparent with you, I am personally not a member of SalesVision so I can assure you that I will not attempt to sell you it unless of course it’s worth investing in.

What I will aim to do is provide you with an unbiased 3rd party look at SalesVision that will hopefully help you to make the best decision you can in the end.

SUMMARY: Yes I do believe that SalesVision is a pyramid scheme and a scam. It’s a system that I ultimately would not recommend you join because it’s run using a very shady system by an owner who has a bad history, in regards to creating really low quality products, over the years.

And well, there’s not a single positive take away from what I researched on SalesVision, which is why I would highly suggest skipping out on the system because, If you do join, you’d not only be unsatisfied with it but also be out of pocket around $100 – $1000.

SalesaVision is essentially a sales funnel, lead generation tool that was initially created for a MLM company called my daily choice but, now it’s separated from it and is a stand alone system.

The person behind this company and the active CEO is Vincent Ortega Jr but his parents, Vincent and Gillian, are also cited as being co-founders.

This isn’t the first system of its kind that Ortega has created, in the past he also started up another tool with his parent’s funding called Elevated Legacy.

However, the company was a huge bust which morphed from individuals paying $19.99 to pretty much took the data of customers to a completely different company which started selling watches and CBD based products.

This was an idea Ortega created in 2018 but, it was in 2019 when he SalesVision was officially formed. Considering his past endeavours it’s hard to trust in Ortega’s business prowess.

Moreover, his previous investments in the very well know crypto scam, bitconnect, really does question his integrity as a business man who intends to help you because it’s clear to me SalesVision is only designed to take as much money from potential customers as it can in order to fill Ortega’s pockets and nothing else, for the most part at least.

One things for sure, it won’t work as well as you’re led to believe.

The system is advertised as being a lead generation tool through which you you can build sales funnels, particularly around the CBD space as that’s the origins behind this system. There are also meant to be more MLM based funnels around other niches which will eventually be created but at the writing of this review, SalesVision is focused on the CBD niche.

Ortega’s intention is to make the system kind of like the click funnels of the MLM scene but, from the research I’ve done on it, SalesVision comes off as way to suspicious.

Besides the funnels section of the tool, Ortega also offers an Academy where you will need to fill in some business details to access as Ortega doesn’t let “just anyone” join.

This academy is simply meant to be a place where Ortega’s teaches people how to be successful entrepreneurs although, I doubt it’ll prove to be anything more than just another method for him to sell to you and ultimately lead you on.

Lastly, within the members area you’ll also be offered is training on real estate selling, which doesn’t make sense for a system like this because it’s a completely different niche nevertheless, the retail training offers information on how you should go about buying properties, fixing them up and eventually reselling them.

SalesVision also offers members the ability to earn from their compensation plan or affiliate program as Oretga likes to call it.

The plan itself isn’t very difficult to understand and includes the following ways you can earn with it.

For the most you’ll only earn commissions on single sales and of course the higher you rank within the company the better your commissions.

The Diamond rank is where the MLM side of the program starts up because this when you’ll start being paid 2 levels deep however, the manner in which the commissions are split means you don’t actually earn the full 50% from a singular sale.

In reality the commission rates are technically 50% however, only 25% is paid to the affiliate who makes the sal3. The other 25% split is paid upline to the first “Diamond Super Affiliate”.

How Much Does SalesVision Cost?

From my research I found that there are 2 different ways through which people can join SalesVision if for some mad reason you’re still interested in it.

The two packages are The Apprentice and The Professional membership levels. 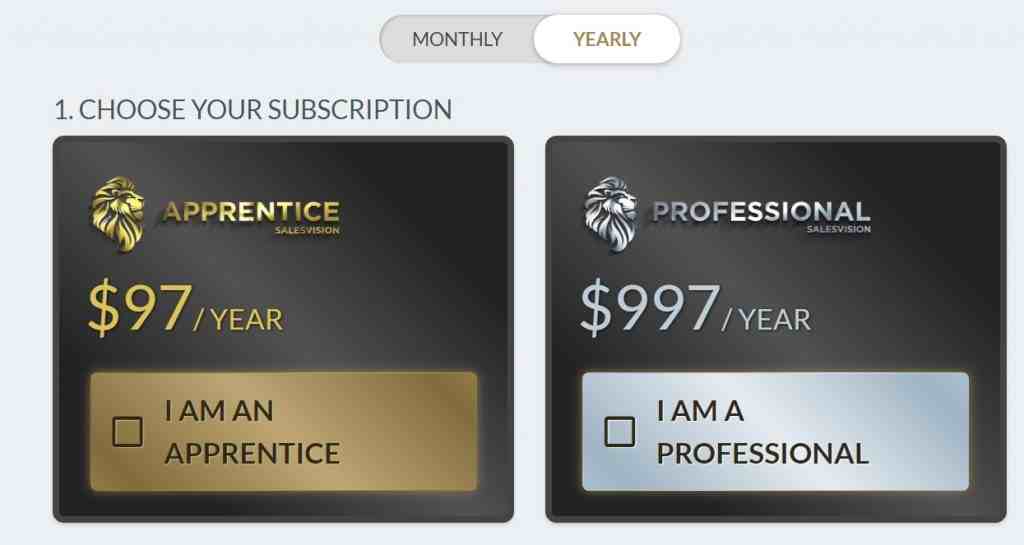 The Owner Has A Poor History

The owner and mastermind behind SalesVision, Vincent Ortega Jr, is known to have been involved in some high profile pyramid schemes and scams, namely Bitconnect, and is someone who’s created some shady products in the past too.

The guy himself seems to have been involved in way too many shady business ventures that joining a company where Ortega is the CEO just does not seem like a very sensible decision to make, in my opinion at least.

The System Seems To Be Lackluster At Best

The whole system is all over the place, from trying to be a sales funnel tool for members, to a lead generation and entrepreneur academy and even delving into the real estate niche.

From what I can see, SalesVision clearly doesn’t have solid vision of where they want to go and, well that’s a little problematic if you were planning to really push the system to others.

There is literally nothing good about SalesVision in my opinion, its simply a sales funnel that you should avoid because its foundations are built by an untrustworthy individual and well, there just are much better funnel building tools out there (Clickfunnels) nullifying the need for SalesVision.

IS SALESVISION A PYRAMID SCHEME/SCAM?

Yes I do believe that SalesVision is a pyramid scheme and a scam. It’s a system that I ultimately would not recommend you join because it’s run using a very shady system by an owner who has a bad history, in regards to creating really low quality products, over the years.

And well, there’s not a single positive take away from what I researched on SalesVision, which is why I would highly suggest skipping out on the system because, If you do join, you’d not only be unsatisfied with it but also be out of pocket around $100 – $1000.

2 thoughts on “Is SalesVision A Scam?(A Pyramid Scheme In Disguise?!)(REVIEW)”