It’s likely that you have come across Origami Owl through an email list, on social media or got it recommended by a friend or family member.

Is Origami Owl a scam? The reasons why you’re here is because you have want answers right so, that’s what I’m going to provide for you within this Origami Owl review.

First and foremost I must commend you for actually doing a bit of extra research before committing to joining Origami Owl. For all you could have known, the product could be a major scam so the fact you’re here right now, researching whether or not that’s the case is a pretty smart move on your part.

To be fully transparent with you, I am personally not a member of Origami Owl so I can assure you that I will not attempt to sell you it unless of course it’s worth investing in.

What I will aim to do is provide you with an unbiased 3rd party look at Origami Owl that will hopefully help you to make the best decision you can in the end.

TYPE OF PRODUCT: Jewelry based MLam

SUMMARY: The good news is that Orgami Owl is neither a pyramid scheme or a scam, it’s a legitimate MLM company that may be worth pursuing if you like the items that are being promoted and also because it is reasonably established.

However, I do have a couple major gripes with it such as the abysmally low success rate it shows and the heavy emphasis on recruitment but, as a MLM company, it’s far from the worst one I’ve seen.

As a whole I still would not recommend joining it because there are much better opportunities out there which don’t limit you to only promoting a single brand (such as my #1 recommended business model) but, as I said OO isn’t a bad MLM and if you’re willing to accept its shortcomings, it may very well be worth a shot.

WHAT IS ORIGAMI OWL?

OO is a jewelry based MLM founded by Isabella Weems in 2010, when Isabella was actually 14. She’s now well into her 20’s but, it’s quite interesting to know the company is still functioning 10 years later even though it was an Idea established by a then teenager and 3 others.

The origins behind the company was even founded under something very basic, Isabella just wanted to save up for a car when she turned 16 and now, well she’s clearly achieved a lot more.

OO supposedly has thousands of distributors, which shouldn’t be all that surprising considering how long it’s been around and out of those, there is bound to be a couple really successful individuals however, whether or not this makes it a good business opportunity to pursue, I’d probably say no but, I’ll explain why throughout the rest or this review.

OO’s product line is quite vast with many different ranges of products as well as different types too. The price of each item also ranges quite a lot too from $6 – $100+.

The products they sell include the following :

Beyond the basic categories, OO also have a variety of different collections you can look into, which include the following :

HOW DO YOU MAKE MONEY WITH ORIGAMI OWL?

As is the case with pretty much all MLM businesses there are 2 ways to make money with them, Origami Owl being no exception.

If you want to join OO, you’ll need to firstly sign up through an already existing member and then you’d be asked to purchase one of their 3 starter kits :

You will be pushed to purchase the more expensive starter kit but, in general terms the cheapest kit honestly isn’t too expensive, making it quite a reasonable price to pay in order to join, especially when compared to other MLM’s.

This compensation plan is arguably the most important document that anyone serious about joining OO should read. I’ll briefly go over it in this section so that you have a rough idea on how to earn with it but, once again if you’re really serious about pursuing OO, you should definitely study it. 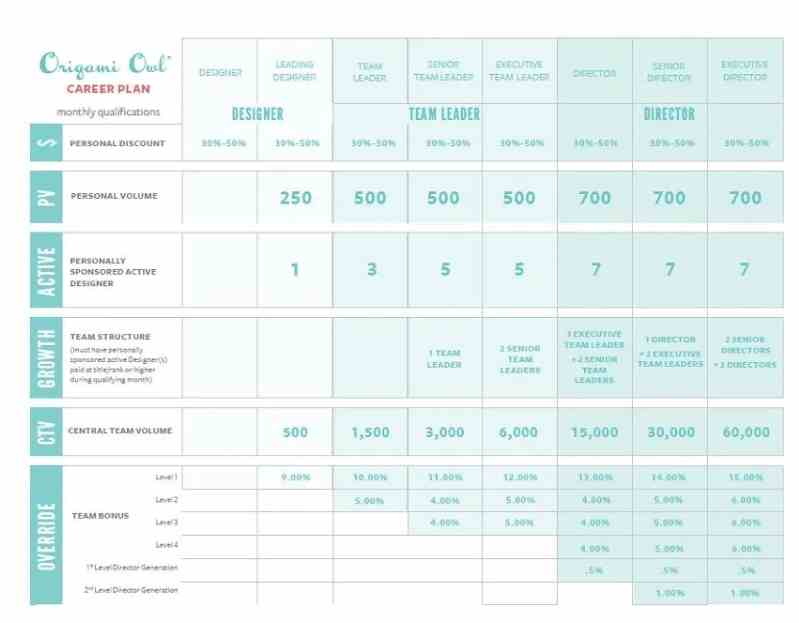 The image above shows the multitude of different affiliate ranks within OO, with 8 ranks starting at designer and going as high as Executive Director.

Of course the large number of ranks and the criteria to achieve the higher ranks won’t be easy to do, unless you recruit a lot or manage to make a ton of sales.

These aren’t the largest number of ranks I’ve seen within a MLM but, even with 8 ranks, the prospect of reaching the upper ranks and ultimately succeeding will be very very slim.

This is the simplest way to make money with OO, you basically buy OO’s products at their wholesale price and then sell them at their retail price whilst keeping the difference as profits.

The commission rates in this case seem to be quite high, being 50% for charms, dangles and plates and 30% for chains, lockets and tags. The higher commission rates make a lot of sense considering the products themselves are really cheap but, even then you’ll probably need to sell a ton to eventually make a full time income.

OO uses a unilevel structure to determine how much an affiliate will earn residually as a distributor. This means that an affiliate will be able to recruit infinitely in the horizontal sense but vertically the earning potential will be capped. In this case its capped at level level 4.

For instance at the second rank you’d earn 9% on level 1.

There is more to compensation but what I’ve mentioned are the 2 core ways to make money with the company. If you still want a more in depth look at the plan I’d suggest checking out the video below instead.

You Will Need To Recruit To Succeed

Although retail sales are one way a very very small minority of affiliates will be able to succeed with OO, it also does not seem like the most practical of methods considering most members will need to sell anywhere between 300 – 400 just to maintain a minimum full time income.

Therefore, recruitment seems like the more logical and I guess you could say practical move in order to grow. Through recruitment members will be able to earn a percentage of the sales their downline makes, which means they’d be making some income on autopilot.

That’s why if you want to succeed with OO, not only will you need to be pretty decent at making normal sales but you’ve also got to either already be good at recruitment or be willing to put in the time and money to get good at it.

Most People Are Failing

According to the income disclosure statement, the majority of individuals are actually failing. 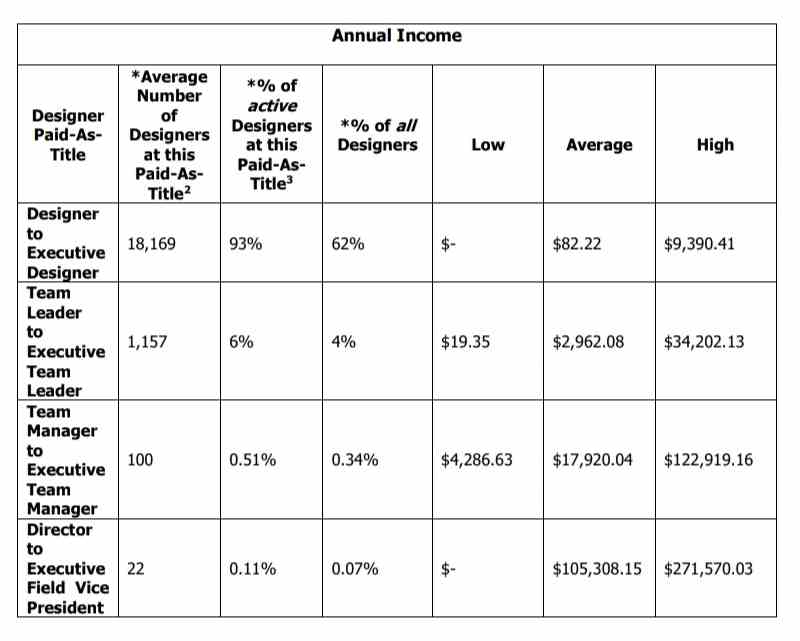 As you can see only 0.6% of all members are making anything worthwhile, averaging just under $17.9k a year, which isn’t bad but also doesn’t really equate to a full time income either.

Yes the statement is slightly older having been issued in 2018 however, the fact of the matter is only around 100 members out of around 18.3k members made money that’d be considered as decent so, you should definitely take this factor into consideration if you’re serious about joining.

It’s Been Around A While

Being 10 years old at this point makes OO a very credible company, especially when you consider the majority of companies within that time period tend to collapse. In fact, currently it does not seem like it’s slowing down all that much, in terms of its growth too so, I’d say this is a positive aspect of the company without a doubt

The Commission Rates Are Pretty Decent

Although for the most part the products themselves are really cheap, the higher commission rates are a nice touch as atleast you’ll make a relatively good profit for the cheaper items.

IS ORIGAMI OWL A PYRAMID SCHEME/SCAM?

The good news is that Orgami Owl is neither a pyramid scheme or a scam, it’s a legitimate MLM company that may be worth pursuing if you like the items that are being promoted and also because it is reasonably established.

However, I do have a couple major gripes with it such as the abysmally low success rate it shows and the heavy emphasis on recruitment but, as a MLM company, it’s far from the worst one I’ve seen.

As a whole I still would not recommend joining it because there are much better opportunities out there which don’t limit you to only promoting a single brand (such as my #1 recommended business model) but, as I said OO isn’t a bad MLM and if you’re willing to accept its shortcomings, it may very well be worth a shot.