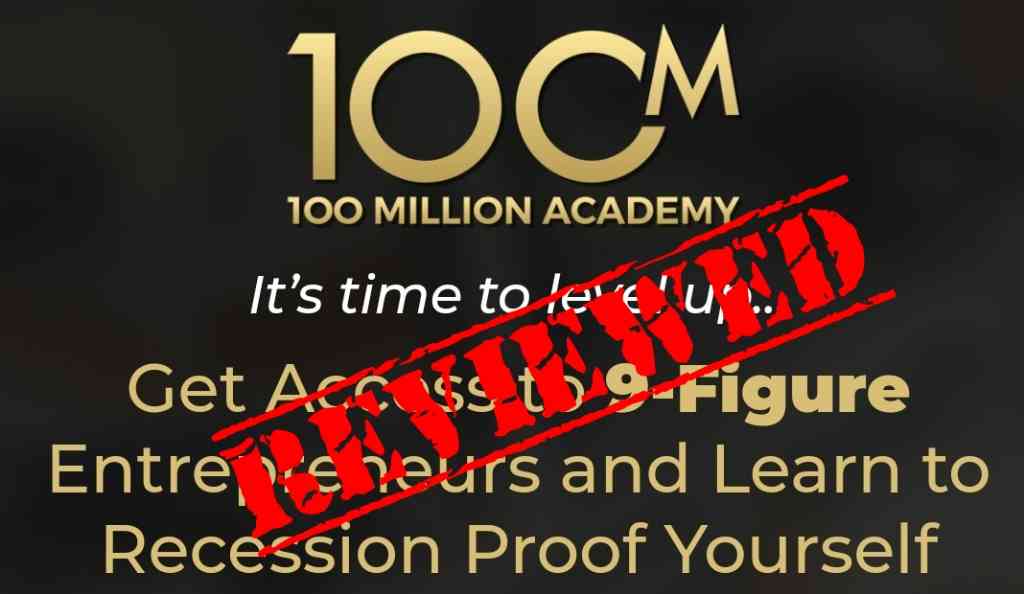 Welcome to my 100 Million Academy review!

It’s likely that you have come across 100 Million Academy through an email list, on social media or got it recommended by a friend or family member.

First and foremost I must commend you for actually doing a bit of extra research before committing to purchasing or joining 100 Million Academy. For all you could have known, 100 Million Academy may very well be a scam and rob you of your money so this review could help you find anything peculiar about it.

To be totally transparent with you I haven’t used 100 Million Academy so I can assure you that I will not attempt to sell you on it unless of course it’s worth investing in.

What I will aim to do is provide you with an unbiased 3rd party review of 100 Million Academy that will hopefully help you to make the correct decision in the end.

SUMMARY: I wouldn’t say that 100 Million Academy is a complete scam because I’m sure there is a little bit of information within that will be helpful however, the fact is that it’s likely only designed to be a sales funnel aimed to get people involved with the $1000 courses created by the gurus within.

Therefore, personally I do not recommend getting involved with MA as it isn’t really designed to teach you, from start to finish, how to make money online and honestly even at the relatively cheap $100 asking price, you more than likely will not even get close to your moneys worth.

WHAT IS 100 MILLION ACADEMY? 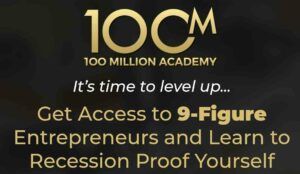 100 Million Academy seems to be a system designed to profit off of the covid 19 crisis, specifically from the stimulus check of $1200 that the majority of United States citizens received in order to get through these trying times.

The course basically involves a collection of very successful individuals teaching you a bit about Internet marketing whilst essentially setting you up to buy into a more expensive course later down the line because as you know the majority of individuals do want to make money at this point in time.

The number of gurus involved with MA is quite vast, involving some very popular gurus such as Neil Patel, the ecommerce success story in Kevin Zhang along with a bunch of other gurus such as Cody Sperber, Dan Fleyshman and Joel Marion, these 3 actually being the owners of the course.

Another thing worth noting is that quite a few of the individuals within the course, namely Billy Gene, Anthony Morrison and Adrian Morrison, were involved with the financial freedom course created by YouTuber Jake Paul, which was widely regarded as a very mediocre course mainly targeting his audience of 13 and under.

That course was widely looked at as somewhat of a scam or at the very least an opportunistic system preying on younger fans and to be honest with you, MA comes across in a very similar manner except it’s targeting desperate citizens with a stimulus check.

HOW DOES 100 MILLION ACADEMY WORK?

MA, from what I gather is a collection of basic videos created by a whole plethora of gurus and millionaires within a multitude of fields going over the basics of the business they work within.

I’m sure that to a certain degree the information provided by each guru will be somewhat useful however, the problem with the course is that it isn’t focused and likely will not delve into the core of each of the business models taught within, whether it be SEO blogging or starting up your one ecommerce store, an amazon store and so on.

These course can be $1k – $2k each so it’s far more expensive than MA but, the information provided within these courses by the gurus will of course be far more in depth than what you’ll see within MA.

Therefore, I do believe that MA is more a less a sales funnel for the majority of gurus and if you truly want to learn how to make money online, you’d probably need to follow through with one of the many sales funnels.

HOW MUCH DOES 100 MILLION ACADEMY COST?

The course itself will set you back $100, which isn’t too expensive however, as I said the whole course is more or less a sales funnel to get you involved with the more expensive trainings from the gurus inside.

I mean think about it for a sec, why would so many well known or “successful” online marketers be willing to work on a project that will provide them little to no profits?

It wouldn’t be worth Neil’s or Kevin’s time getting involved in a $100 course shared between a bunch of other money hungry individuals so, it only makes sense that there would be an ulterior motive to the whole thing.

Expecting world class training from MA is not likely to be the case.

Therefore, even if the $100 price tag may seem enticing at first, considering the number of successful gurus teaching within the course, the likelihood of MA just being the front end of a sales funnel is the more probable outcome.

Although I’m sure that some of the information found within the course may be useful, it’s unlikely that whatever you find within will actually help you learn the strategies to making real money online, unless you fork out even more money for the upsells the gurus are selling.

In short, if you want to learn how to make money following one of the methods the gurus are teaching, you’d probably need to be willing to invest another grand or 2 in order to do so.

As I mentioned earlier Billy Gene, Anthony Morrison and Adrian Morrison have previously worked with Jake Pauls course, which was widely regarded as a kind of scam targeting kids so, that little bit of history does make MA, in my opinion at least, come across as a little shady and a reason to be suspicious of the individuals involved with it.

At $100, it relatively cheap although, I’m pretty sure you could find courses with far more information on the topic for that money however, at the very least it won’t result in individuals losing out on too much money if they decide to check it out.

IS 100 MILLION ACADEMY A SCAM?

I wouldn’t say that 100 Million Academy is a complete scam because I’m sure there is a little bit of information within that will be helpful however, the fact is that it’s likely only designed to be a sales funnel aimed to get people involved with the $1000 courses created by the gurus within.

Therefore, personally I do not recommend getting involved with MA as it isn’t really designed to teach you, from start to finish, how to make money online and honestly even at the relatively cheap $100 asking price, you more than likely will not even get close to your moneys worth.